It was way better than dinner and a movie. 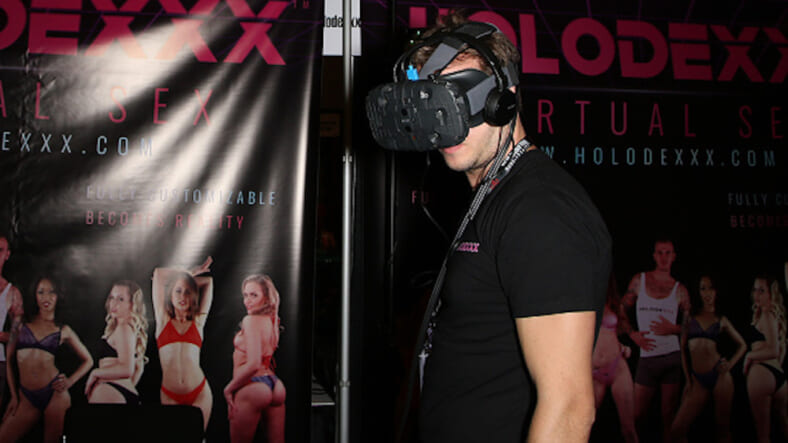 But there I was in Room 1102 of the Hard Rock Hotel in Las Vegas, about to go full mast in front of Naughty America Chief Information Officer Ian Paul and Creative Director Scott Man, who had just handed me business cards emblazoned with a female ass and legs raised into the air. My window into this wonderment was a $99 Sumsung Gear VR headset, which meant that I could see the actual pixels on the Samsung Galaxy inserted an inch from my face. I was kind of hoping they would have the just-demoed $600 Oculus Rift on hand. But seriously, I would have enjoyed this on a View-Master. This was reality like I’d never seen it. Even in my own reality. Especially in my own reality.

Laugh if you want, but imagine global politics without the sexual frustration. Imagine everyone from presidents to soldiers replacing their battle helmets with jackoff headsets and making love not war. This is what John Lennon was singing about. And the tech is only getting better. Paul told me Naughty America will stream 4K video soon, and he’s already talking to the creator of the Autoblow 2 about synching his blowjob machine up to the VR action. Of course, there is a downside. For example, good things are known to come from leaving your house every now and then. Also, this immersive world makes it much easier to get caught by your significant other, since you can’t see and can only barely hear the outside world.

Plus, it eliminates all plausible deniability about what you were doing when caught. (Oh, OK. You were enjoying the New York Times virtual reality app. And what was that in your hand now?) Then again, that last particular downside is mitigated by the fact that you may not need a significant other that much anymore. About 20 minutes into my experience, I encountered the only thing capable of pulling me out of a world so fantastic — comedy gold. While doing stuff to my avatar with her red-stockinged feet, Starr mispronounced an eighth-grade word, and I lost it.

Do you have interesting ideas, pitches, or demands for what Corey should do next? Email him at coreylevitan@gmail.com