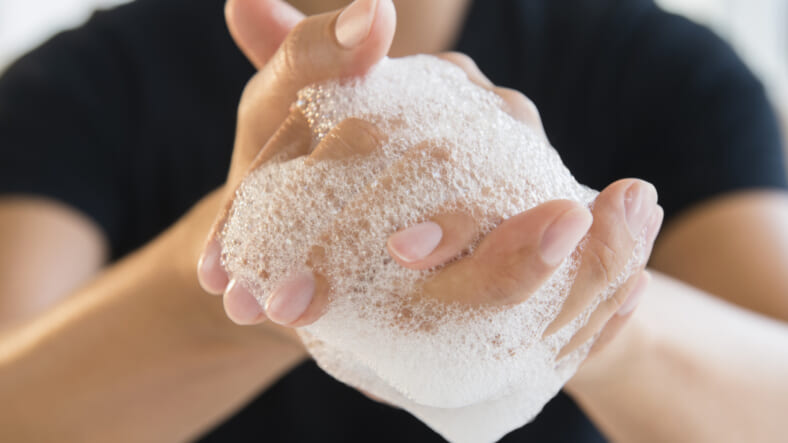 You’re a filthy liar. No, maybe not you specifically, but most people rarely come clean when they talk about washing their hands. A recent Guardian story reminded us that in 2005, the American Society For Microbiology reported that 97% of women and 96% of men claimed to have “always washed their hands in the bathroom.” The research indicated that this was bullshit: only about 75% of women and 58% of men actually washed their hands after relieving themselves. Only 58% percent of men subscribe to basic bathroom etiquette! That means 38% of men are lying about washing their hands after taking a piss. Do you even understand how filthy the average public restroom is? Let PBS blow your fucking mind:

In one study, researchers disinfected shared restrooms at a university and then sampled them over time. They found that human bacteria can recolonize a bathroom within an hour of it being cleaned. And those microbes can survive for hours after humans have left, too.So, what’s actually lurking in the bathroom? Well, gut bacteria, which come from people’s feces, turn up on toilet seats. And in women’s rooms, vaginal bacteria show up on the seats, as well. Some toilet flush handles also have soil bacteria on them—probably thanks to germophobes flushing with their feet.

Public bathrooms (and hell, even private ones) are festering swamps of bacteria, and you know this. There’s no excuse for those 38% of you who lie about washing your hands to skip a rote required task. Are you animals? And don’t think that a quick spritz of water and an air dryer will help. A 2014 study indicates that hand-blowers, while less wasteful, spread far more germs than traditional paper towels:

British researchers placed a harmless type of bacteria on the hands of volunteers in order to simulate poorly washed hands. They then had them use warm-air dryers, high-powered “jet-air” dryers or paper towels to dry their hands.The investigators measured airborne bacteria levels and found higher amounts of germs around both types of dryers than around towel dispensers.Jet-air dryers were the worst, the study found. Bacteria levels in the air around jet-air dryers were 4.5 times higher than around warm air dryers and 27 times higher than around paper towel dispensers

Here’s the deal: Men wash their hands. Real men wash their hands thoroughly, vigorously, and in line with CDC guidelines. Use soap and water. If those things aren’t available, use a hand sanitizer that’s at least 60% alcohol. Wash them before, during, and after eating and preparing food, after using the toilet, after touching your face, after fucking everything. And in case you need a lesson, here’s the right way to wash them, per the CDC:

Wet your hands with clean, running water (warm or cold), turn off the tap, and apply soap.Lather your hands by rubbing them together with the soap. Be sure to lather the backs of your hands, between your fingers, and under your nails.Scrub your hands for at least 20 seconds. Need a timer? Hum the “Happy Birthday” song from beginning to end twice.Rinse your hands well under clean, running water.Dry your hands using a clean towel or air dry them.

Seriously guys, it takes a minute. Tops. Stop being lazy and get it done. You have no excuse.