The skies were pretty damn friendly for these two. 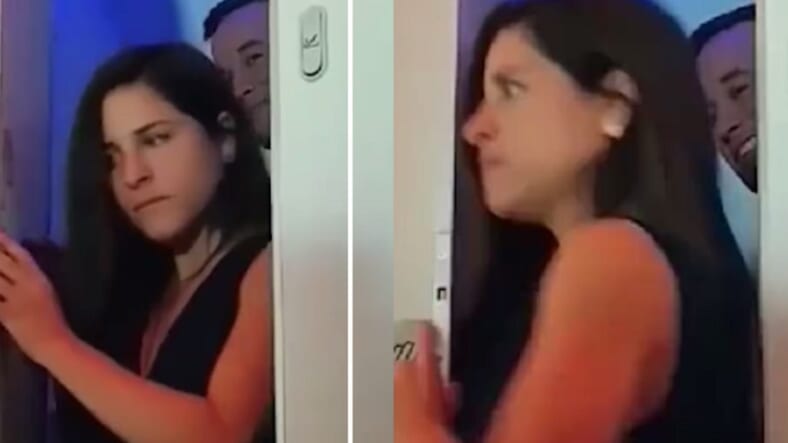 A British traveler named David Eve was on a July 4th flight from London to Miami when he apparently became aware that something was going on in the lavatory just to his left. Clearly worried the plane was about to be taken over by grunting, thrusting hijackers, he stealthily turned on his phone camera to catch the perpetrators red-handed.

What he captured on the video—which he later posted on Facebook with the caption, “Wait, was, wasn’t there just two people in there? Naughty Americans!”—was a couple who had very clearly just done something. In a court of law it wouldn’t be enough to convict them of anything, but the look on the woman’s face, captured between 3-4 seconds into the video, really tells you all you need to know.

That is the expression of someone who saw Eve’s phone likely tilted at a telltale angle right away, knew she’d been busted, and was not happy about it.

Her dude, on the other hand, clearly had no complaints whatsoever, and he is the funniest thing about this.

If that guy was a cat, we could assume he’d just consumed a whole pet store full of a canaries.

The woman here seems pretty damn put out that her mile-high club membership may have been commemorated by a snooping Briton. She could at least be consoled that the airline itself apparently had no problems with this off-brand usage of its bathrooms at all.

Virgin Atlantic shared the video on its Facebook page as well and added, “We’re pretty sure that’s our plane! The mood lighting certainly put a smile on their faces 😂 #smilehighclub.”

If there is any lesson to be learned from this, it’s that joining the mile-high club is just as fun as you’d think, but make sure your girl is truly cool with it before you do—because we’re certain these two probably had to sit down and have some kind of talk about it later.