And we’re here to tell you about the fleshy future of technology. 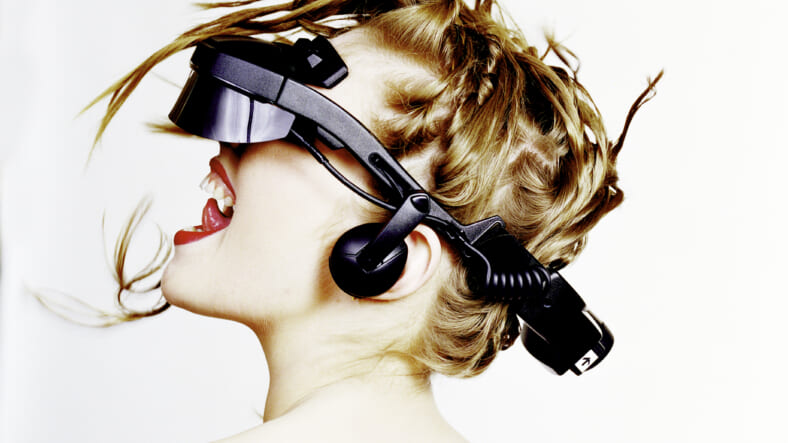 But mankind likes to outdo itself. As we delve ever-deeper into the myriad ways of satisfying our desire to watch strangers do sex things to each other, the push to personalize porn becomes more apparent. Cam girls have long been part of the pornography menu, adding a one-on-one experience for users who prefer something more interactive. Plus, it’s a lucrative venture for the largely-female base. In an article for New York Magazine, a woman who regularly cams going by the name Rebecca said, “At first it was financially motivated, but I found it was kind of pleasurable for me. It made me feel good, I guess. People message you and ask you to do things or customize something for them. You can say yes or no.”

But CamSoda’s group VR platform changes the equation. With multiple girls in a room, you have a veritable feast of visual options. Users purchase tokens, which they can use to ask the women to carry out basically whatever their hearts desire, in a live, 360-degree format.

Afterwards, we spoke with Charley Hart, one of the cam girls, who understands the unique challenges that VR presents to this model. She’s been with CamSoda for over a year and helped shed some light on the basic appeal of camming in the first place: voyeurism. “The viewers can see us in our everyday lives in a voyeuristic approach, or interact with us live by talking and tipping,” she told Maxim.

But what makes VR camming different? Part of it is the greater level of realism. Seeing a woman in three dimensions, moving around the space and following her with your eyes can certainly place the viewer in the middle of the action, if that’s what you’re after. But to Hart, it’s all about choices. “I love that the viewer has so many choices, and it’s just a sensory overload. You can turn your head and get a whole new view. People are all about options and that’s what the VR gives you. When you have multiple girls vying for your attention, though, it’s up to you where you want to look,” she told Maxim.

Our review? Not for the faint of heart, but definitely worth a peek if you tire of the regular offerings your laptop can easily procure. It was an almost eerie sensation to feel like you’re actually in a room with a woman, then you need to sneeze or re-adjust your goggles or what have you, and suddenly you’re thousands of miles away. The live interaction made me feel a bit like a horny puppet master, a role I don’t eagerly embrace, but can certainly see why there would be many who would. Yet there’s no doubt, given all of the investment in VR technology, this is just the beginning.

But keep in mind this helpful bit of advice: “The only part I don’t like is the way some guys talk to us,” Hart counsels. “I think they forget that we are actual people and there is a way to talk to a woman. I try and remind my guys that although I love my job, and while I am open with them, there are some things I like to keep private.”