Stop Putting People On the Back Burner, Jerk

It’s time to date like an adult. We’ll show you how. 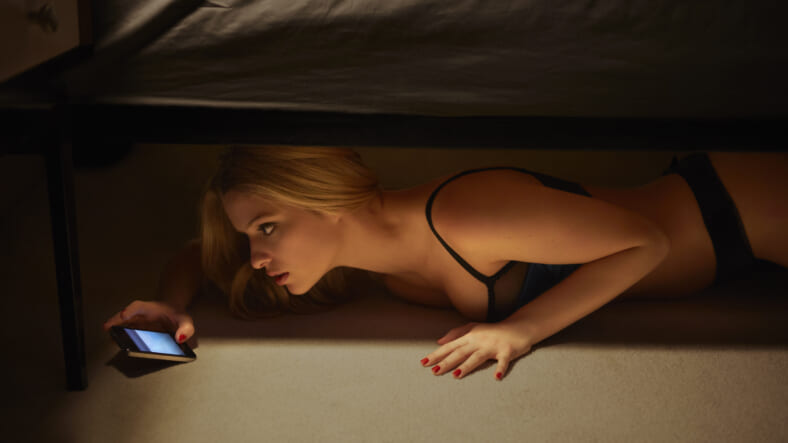 sid“Wait. So he’s ghosting you, but he’s also trying to sleep with you? I don’t understand,” my friend Josh said to me, as I tried to explain how a guy I’d been seeing for a couple weeks had gone inexplicably MIA.

After four hot and heavy dates, the rapid-fire texts and proactive date planning from Theo had cooled considerably, a sharp counter to his earlier dogged pursuit. But rather than disappear entirely in the grand millennial tradition of ghosting, Theo was instead playing a maddening game of texting me a non-sequitur a day – usually about sex, despite us having gotten nowhere close in the days prior – before disappearing from the conversation he started. (I know, I know, I pick real winners.) “I know this game,” I whined back to Josh. “He’s back burnering me.”

Back burnering, a reference so ubiquitous I’ve rarely had to explain its kitchen stove connotation to anyone I’ve spoken with, is devastatingly simple: when someone you’re casually dating keeps you on just enough ice to prevent you from throwing in the towel entirely. Unlike casual dating, the defining characteristic of a back burner hookup is the fact that the interested party is never complicit in the relationship being cooled to a simmer.

Unlike ghosting, where the perpetrator disappears entirely without warning (The New York Times generously allows ghouls up to three dates before declaring an official ghost), or its close cousin, the slow fade, back burners rarely offer the type of quickly closing doors that ghosting and slow fades do. Instead they linger on forever, tendrils of optimism that keep the interested party constantly on their toes. Back burners aren’t a method of evasion predicated on hoping the other person finally takes the hint; back burners are a way, instead, for the uninterested party to have their cake and eat it too, often while exerting the least amount of effort possible.

To be fair, neither of our hands were clean. Only mildly interested in him after our first date, I let Theo languish on my back burner with little real interest. But as we spent more time together, I didn’t anticipate being moved to his back burner either.

In Theo’s case, that involved starting conversations laced in double entendre, alongside a few sexts so bad my friends are still delighting in the screenshots, with no further invitations to make good on any of his big talk. The conversations became fewer and further between; the lag time between general niceties and sexual propositions shrank precipitously. And yet they still exist; one small flare sent up per day from Theo, designed specifically to back burner with the best of ‘em.

“I cannot wrap my head around the fact that some guy would text you about your boobs all week, and then not try to actually see your boobs,” marveled my ex-boyfriend, who has been in a relationship so long now he’s forgotten how terrible humanity can be. And while I agree with him – who turns down free boobs? – if you ask my legions of back burning friends, sometimes even the D isn’t enough to run the risk of giving a back burner more face time.

“Sometimes you keep a girl on the back burner because you have a front burner girl you really like. Maybe she’s even out of your league and you’re a little insecure about it,” said my friend Matt. “Having a back burner girl who is into you can give you the confidence you need to go after the front burner girl. And to thank her for her service, you bone her every now and then.”

As callous as Matt comes off, he’s far from alone. Nearly every person I spoke with admitted that they had back burnered someone before, despite each also having been back burnered themselves. A back burner lacking in conscience, or even a hopeful burned might try to suggest that no back burnering is taking place – “This is just how casual dating goes, right?” – but they’re fooling themselves. As someone who is currently keeping a different guy who hasn’t quite gotten the hint on my own back burner, despite also being back burnered by Theo, I know a back burner when I see one. (Irony, nor karma, seem to be very important to back burners.)

“I LOVE BEING THE BACK BURNER,” my friend Anna insists. “Wait, maybe that’s my thing? It’s low pressure! For a commitment-phobe, being someone else’s back burner is ideal.” She’s quick to clarify that she only starts her set of burners when she’s single; for Anna, staying on someone’s back burner isn’t an act shrouded in mystery – she’s upfront about the fact that her relationships at that point in time are going to stay casual. “The central conceit to back burnering is monogamy itself,” she points out. “If you don’t get monogamy, then there is no back burner, because life is always a full set of burners.”

But most back burners don’t operate in such radical transparency, which is exactly why back burnering is honestly a giant bunch of bullshit, and should be put to bed immediately. Whereas ghosting and its merits can be hotly debated, especially with the length of the relationship often being called into question, back burnering is a specific choice to play on someone’s desire to be a front burner, while purposely not bumping them into that role. Put simply, it’s a dick fuckin’ move.

Back burners are selfish acts, to be sure, a fallback plan for a situation that shouldn’t need a fallback plan – especially when the collateral damage is human capital. Even if you take Matt’s theory to heart, that a solid back burner can give you a confidence boost, you’re still making a tacit choice that your needs outweigh the feelings of the person who’s interested in you, while you use them as a backup plan to your first choice fuck buddy.

“It’s definitely a palliative measure,” says Roma, a now-married friend who back burnered a college flame in the weeks before they graduated, while seeing other men. “I knew I was leaving New Orleans, and then leaving the country, so I think I was right in saying ‘A relationship can’t happen right now,’ but it was also done in a way where I could pass the blame.”

That’s saying nothing of the juggling act that goes into place to keep multiple people on your back burner, without giving them too much hope. A back burner enthusiast, after all, doesn’t cop to being a cad, so outright douchebaggery is usually sidestepped in lieu of the gentle gaslight: enough check-ins to feign ignorance if called out on fading away, not enough to hold up in the court of public opinion as proof a relationship of any nature reasonably existed. This level of juggling even for a rational person, can be exhausting.

For Roma, her back burnering began as a good way to blow off steam and not get too serious with anyone until she knew her post-graduation plans, though it quickly got murky when two of her back burners both made strong cases for going full flame. “You start hooking up with someone, you try to keep it casual, and then you’re actually just falling for them,” says Roma. “All the while, my future husband is living in another state, and we’re talking about how we’ll get back together if I move to New York. This was a very chaotic time in my life, but worth it for the D.”

But even for good dick, expectations can be a bitch, even if you’re the one placing someone else on the back burner.

“By definition, everyone I hook up with is back burnered by me,” explains my friend Kaley, who has an open marriage, and is currently seeing a side flame regularly. “[He’s in an open relationship as well] so we’re back burnering each other in a very tangible way, tempered only by the fact that we’re in the same boat.” While her rationale for actively back burnering is as solid as they come (and arguably the only valid reason in the oeuvre of back burner history), it’s not without its consequences.

“There have been moments where we’ve had to prioritize our relationships,” Kaley explains about her side piece. “I did have an unexpectedly insulted reaction when things just weren’t working recently…He offered up that he’d just had a morning fuck session [with his girlfriend], but a part of me did experience a pang of sexual jealousy. It’s a interesting concept, being honest about the fact that you’re back burnering someone without being insulting.”

If the weight of other people’s feelings aren’t as troubling, consider this: back burnering is also a colossal waste of time. In a survey of 216 readers, a whopping 56% admitted that they’ve never actually moved someone on a back burner up to a full time spot on the roster – a choice that seems to happen regardless of the gender of the person doing the burning.

“I’ve never front burnered a back burner person,” Kaley says emphatically. Matt concurs. “Yeah…no. If they’re lucky, they can become interim front-burners, like when a coach gets fired and his assistant has to step up until the end of the season. Everyone knows it isn’t going to be a permanent thing. They’re just waiting for the front office to finish interviewing the real talent.”

In the age of frictionless dating and our unyielding national quest to be so chill we freeze to death, indicating a preference for any type of commitment can feel as nostalgic and quaint as courtship and arranged marriage. But even a casual relationship deserves definition, so that both parties are fully aware of the state of their union. “Boundaries kind of define relationships for me,” says my friend Hannah. “I think a relationship can be more casual and less formal, but both parties need to be on the same page, which is pretty challenging because there aren’t boundaries when you back burner.”

Theo’s check-in texts still trickle in like clockwork, and even knowing that I’m being back burnered, it’s hard to stay on a high horse; after all, what if he really was just busy with a festival promoter who came into town unexpectedly and sucked him into a dinner, and that his repeated unabashed a propos requests to see my nipples on Snapchat were just the first seeds of our “This is how Mommy and Daddy fell in love, kids” story, rather than a sign that I date garbage men?

Speaking strictly for my own evasive behavior of back burners past and current, though I would venture the same for Theo and the cadre of conflict-averse jerks I seem to socialize with, a simple “I’m not looking for anything serious, but I am game for casual Naked Twister” wouldn’t be that hard, and it’d be significantly less humane. Who hurt you, back burners? Do you enjoy having a person you’re dating second guess every aspect of their self-esteem and how they act on dates, because you were too nervous to be direct about your feelings?

“Ghosting, I can put up with. Maybe your barometer is different from mine for early dates,” says my friend Kira. “But willfully keeping someone on the back burner? That just makes you the disposable ex-lover in a B-movie rom com, at best.”