That’s a LOT of booty. 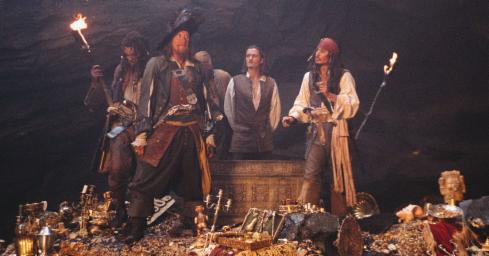 A mind-boggling $10 billion worth of shipwrecked treasure has reportedly been discovered in a sunken vessel found off the coast of Colombia.

Researchers with the Massachusetts-based Woods Hole Oceanographic Institution (WHOI) found loads of gold, silver, emeralds and other priceless object aboard the San Jose, a  Spanish galleon that sank near the Baru Peninsula in 1708 while battling the British in the War of Spanish Succession. The ship was first uncovered near Colombia’s coast back in 2015, but only now are the details about its $10 billion bounty coming to light.

Its ultra-precious cargo led Marine archaeologists to dub the San Jose the “holy grail of shipwrecks.” The WHOI was recently granted permission for the first time to share new information about the ship and its buried treasure.

Boston Magazine provided more details on the autonomous underwater vehicle that was employed by the WHOI during the excavation:

[The institution] sent an underwater rover called REMUS 6000 to map the ocean floor around the Barú Peninsula. The rover, a large oblong device capable of diving to depths far below the ocean’s surface while carrying powerful sensors, has also photographed the Titanic, and was used to find the wreckage of the Air France 447 in 2011.Scientists working near Colombia were able to locate the ship—which has remained undetected since it sank during the War of Spanish Succession more than 300 years ago and has tantalized treasure-hunters for decades—by using the REMUS’ sensors to find cannons bearing distinctive dolphin markings.

“The wreck was partially sediment-covered, but with the camera images from the lower altitude missions, we were able to see new details in the wreckage and the resolution was good enough to make out the decorative carving on the cannons,” said WHOI engineer and expedition leader Mike Purcell.

The treasure is the subject of a legal battle between several nations and private companies, but Colombia ultimately has plans to make the recovery.

That is, if pirates don’t get to it first.