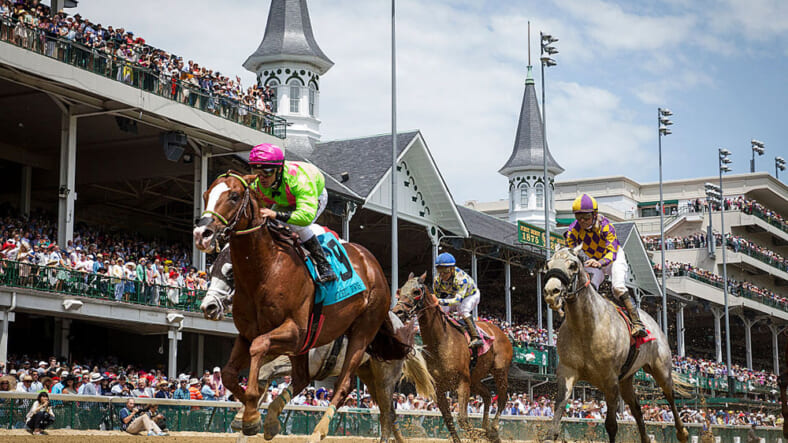 The race was on just after 6:30 p.m. on the first Saturday in May at Churchill Downs. In what is usually — for bettors, casual gamblers, and horse lovers — two of the most exciting minutes in horse racing, plenty of tasty mint juleps were sloshed around the grandstand as favorite Nyquist battled a field including strong contenders Exaggerator and Gun Runner to the finish. In the end, earthquake detectors in Louisville likely registered the reaction as Nyquist crossed the finish line, winning the 142nd Kentucky Derby.

Nyquist was undefeated in 7 out of 7 races. Victory would’ve made the horse the first undefeated Derby winner in nearly four decades. However the three-year-old thoroughbred trained by Doug O’Neill and ridden by jockey Mario Gutierrez wasn’t necessarily a lock, as noted in SB Nation’s race preview Thursday. Writer Kurt Mensching pointed out that there was “no super horse in the 142nd running of the Kentucky Derby” and that Nyquist, prior perfect record notwithstanding, “didn’t get the best draw,” starting in the 13th stall.

Mensching’s pick was the eventual second place Derby finalist Exaggerator, trained by J. Keith Desormeaux and jockeyed by Keith’s brother Kent. Even though Exaggerator had lost to Nyquist in a previous race, the colt maintained pretty high odds going in at 5-1, just behind Nyquist’s 2-1 odds at race time.

Horse racing, like any sport, has an inherent element of the unpredictable, and that’s what makes the build-up to those amazing two minutes on a May evening at the Downs so thrilling.

Regardless of the race’s outcome, Derby Day’s festivities will last well into the night in Louisville, and some tired horses are getting some well-earned rest — especially Nyquist.