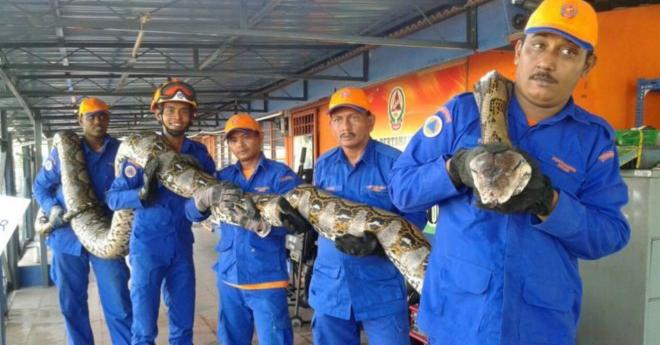 Snakes are arguably one of the most recognized and feared of all reptiles, probably because many of them, like the Black Mamba or  Python, are capable of poisoning or strangling us to death at will.

And even if you weren’t already rightfully terrified of these formidable reptilian beasts, you may find yourself squirming a little as you gaze upon five men holding what is believed to be the biggest snake ever captured.

According to The Guardian, the 26-foot mammoth reticulated Python was spotted in construction zone of an overpass near the vacation destination of Penang. The Malaysian Civil Defense Force was promptly notified and was able to capture the snake within 30 minutes.

The serpent would have probably snatched the Guinness World Record for the largest snake in captivity away from the 25-foot-Medusa, who resides in Kansas City as part of a haunted house attraction, but she died the same day she was captured after laying an egg.

According to BBC news, the attention it received and the process of its capture probably compounded the stress of giving birth.

We don’t know whether to be relieved or saddened by this news, but let’s just hope the baby doesn’t take after its mammoth mother, or there could be hell to pay.