“Aren’t you sick of hearing and reading about me?! LOL” 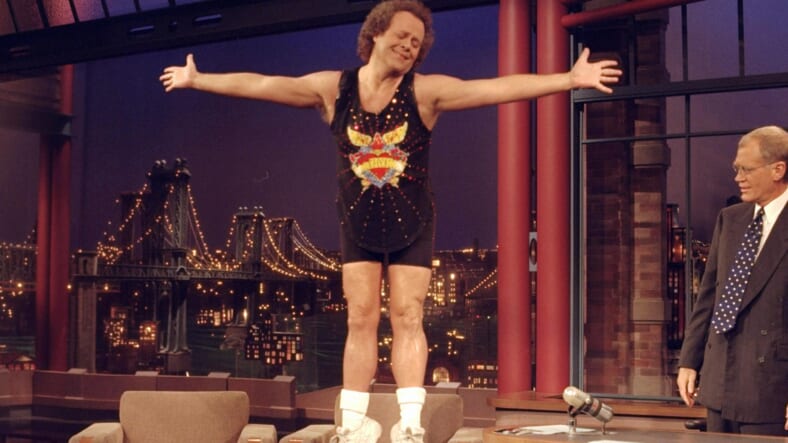 The mystery of fitness guru Richard Simmons’s fate has been so compelling to some it even inspired a podcast—Missing Richard Simmons—about seeking him.  Questions about the once ubiquitous celebrity ran toward the ominous: What’s he been up to? Is he sick? Is he under the influence of a Machiavellian housekeeper?

Well, turns out Simmons wants his fans to know things are okay—basically. In what PEOPLE magazine said was the weight loss legend’s first direct address to fans after he was taken to the hospital recently for “severe indigestion,” Simmons struck a lighthearted tone familiar to anyone who heard his guest spots with Howard Stern over the years:

“Hello to everyone who has shown concern for me and sent their good wishes. You will never know how much it means to me. Aren’t you sick of hearing and reading about me?! LOL Well by now you know that I’m not ‘missing,’ just a little under the weather. I’m sure I will be feeling good and back home in a couple of days,” Simmons says in a statement.Simmons, who has not been seen publicly since Feb. 2014, made the decision to go to the hospital on Monday after having stomach problems, his manager, Michael Catalano, told PEOPLE.“This has reminded me that when you need help you can’t be afraid to reach out and ask for it. We all think we should always be able to solve our problems all by ourselves and sometimes it’s just bigger than we are.”

Simmons went on to say that he had “reached out” and hoped his fans would do the same. “I’m sure there are people in your life who love and care for you and would do anything to help you with the challenges you face,” Simmons’s statement read, “Just knowing you care has already made me feel better. Hope to see you again soon!”

Manager Michael Catalano made Simmons’s absence from public life sound pretty rational, telling PEOPLE that he “was ready to quiet down” after essentially putting all those whom he helped on their weight loss journeys through the years.

There you go then. Simmons is just fine. For all we know he’ll pop up on Howard Stern’s show again one day soon, as if he’s never left, and talk Stern into a vigorous aerobics session set to hits like “It’s Raining Men.”

Anything seems possible with a guy like Richard Simmons.