This 30-Hour, Puke-Filled Flight From Hell Is the Stuff of Nightmares

Next time, take the train. 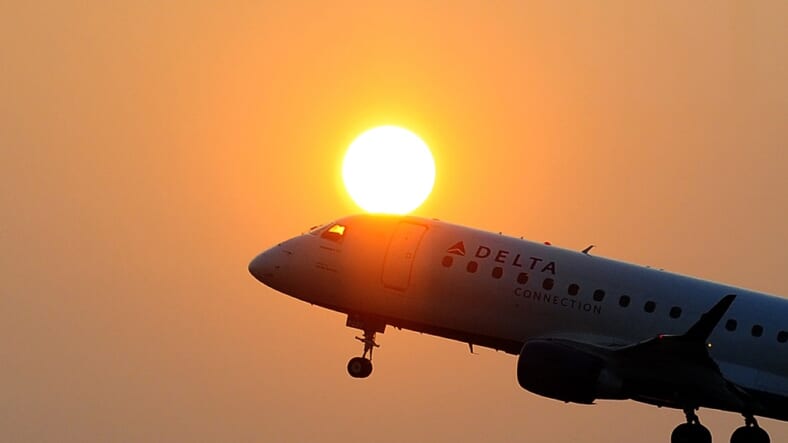 Short of having lived through an actual crash, whatever grim air travel stories we can think of tend to pale in comparison to this. The puke-filled, day-long journey of passengers on Delta Flight 944 from the Dominican Republic to—eventually—JFK sounds like it was one for the ages.

Delta 944 was coming from Punta Cana in the DR and in good weather it would have taken a mere four hours to reach its destination. However the 159 passengers found themselves setting down in Manchester, New Hampshire after heavy air traffic prevented their scheduled touchdown. There the plane re-fueled, but it couldn’t take off again—according to NBC New York, the flight crew had by then reached their maximum number of flight hours. Even worse: Delta 944 was an international flight and there were no customs officers available to process passengers.

Typical New Hampshire winter weather made what followed sound like the beginning of a horror movie set in the arctic:

After waiting two hours on the plane, passengers were finally allowed to deplane but they had to walk through heavy snow to get the customs area, [passenger Aye] Soe told NBC News. “It was snowing and cold, and everybody was tired and cranky after waiting on the plane for two hours,” another passenger, Corie Buonanno of Tarrytown, told NBC 4 New York.

Things sort of improved after customs officers made it in from Maine, reported the NBC station. Passengers went through the usual procedures and were given lodgings in nearby hotels.

The following day, when the beleaguered travelers thought they were headed home again, severe turbulence provided the puke-covered cherry on top of this crappy flying sundae. Passenger Maribel Reyes told NBC New York that many people were “getting sick, several people needed oxygen.”

“It was really bad,” said Reyes, “I never experienced turbulence like that. I thought the plane was going to break in half. The pilot described it as a blender.”

The Chicago Tribune reported that Delta issued an apology, but noted that at least one passenger, Lauren Karasek, discovered that and bonus Skymiles were almost all they’d receive as compensation for all the hassle.

With the sheer volume of flights that take off everyday inside and outside the United States it’s inevitable that snafus happen.

But it’s also pretty easy to be philosophical about such things until they happen to you, and the stranger to your left has only just found their sick bag in time to catch some turbulence-induced vomiting.

Enjoy your next flight!