The 5 Craziest Things We Just Learned From Elon Musk

Things are about to get weird. 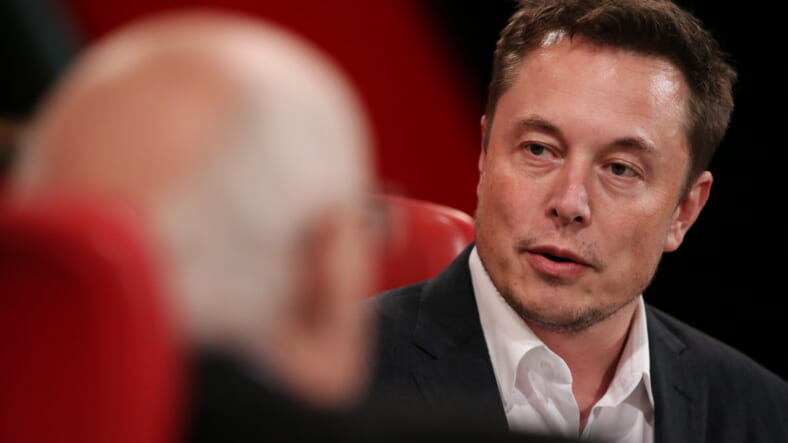 Elon Musk is a veritable font of nutty ideas. Like the notion that an electric car company could build a nationwide network of quick-charging stations that would let us drive an electric vehicle from coast-to-coast. Or that space travel would be a lot less expensive if we’d just stop ditching the rocket into the ocean and land the damn thing so we can use it again.

Oh wait, he’s actually accomplished these landmark achievements. Next up will likely be his completely bonkers Hyperloop proposal to move people around in giant tubes like a human-scale 20th-century pneumatic mail system.

So at this week’s Recode.net Code Conference, when Musk had some interesting things to say, we can’t simply dismiss them as the crazy musings of a crackpot. But as nutty as some of these proclmations may seem, ignore Musk at your own risk—he’s bound to prove you wrong.

1. AI could conquer humans like house cats  Computer brain power is accelerating so rapidly that it will soon outpace humanity’s ability to keep up. These AI supercomputers could have little use for us, but might tolerate humans, keeping us around for amusement like “house cats,” Musk said. A good thing about Musk and his notions is that he always backs up his thoughts with ideas to address the issue. In this case, Musk thinks we can’t beat ’em, so we should join ’em, using injected “neural lace” to supercharge humans’ brain function, letting us keep ahead of our future robot overlords.

2. We may all be living inside of of a computerMusk hypothesizes that our reality could be nothing more than a simulation running on the computers of an advanced civilization. Sound like an outside shot at best? Musk thinks it is the other way around: “There’s a one in billions chance we’re in base reality.” Hmm. Hopefully nobody trips on the power cord anytime soon.

3. Humans will colonize Mars by 2025Now we’re into more familiar Musk territory. He likes to predict technological advances on a more aggressive schedule than proves practical in reality. The company plans an unmanned launch to the red planet in 2018.Acknowledging his past over-optimism on delivery promises at the introduction of the Tesla Model 3, when he promised the cars will reach consumers by the end of 2017, Musk chuckled, “I do feel fairly confident it will be next year.”

4. Direct Democracy is Best For Mars Musk believes that any Mars colony will have a direct democracy system. “The potential for corruption is substantially less in a direct democracy,” said Musk, who jokingly called himself “king of Mars.” “It should probably be easier to remove a law than to create one. Laws have infinite life until taken away.”

5. Autonomous car technology will be ready in two yearsEver the optimist Musk said he believes fully self-driving cars will be technologically feasible in two years, but that government regulations will probably take another two years to catch up. He’ll probably need all four of those years to get cars truly ready to drive themselves, so it works out either way.