“Most athletes get gamed…That has not happened to Alex. He’s got a bullshit detector that’s pretty damn good.” 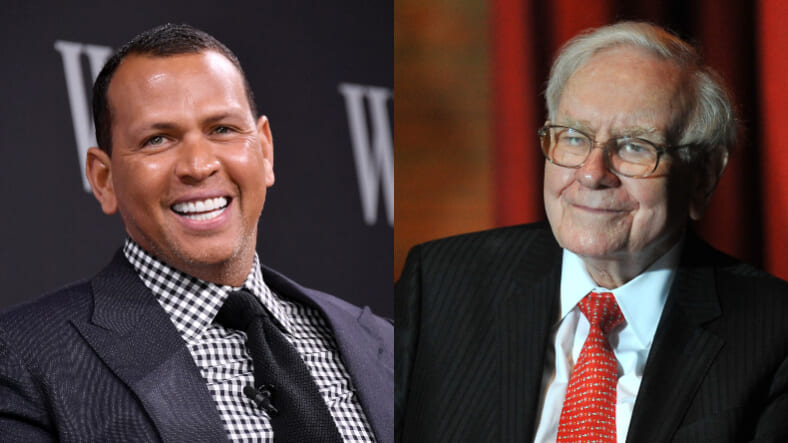 “Alex may give me some credit—but he doesn’t need me,” Buffet said. “He’s got a money mind. He just gets things, if they’re business-or money-related.”

Yes, A-Rod is the highest-earning baseball player of all time, having made over $450 million during his 22-season career. But his current wealth isn’t just leftover MLB cash.

Rodriguez serves as CEO of A-Rod Corp, his investment company, which he says has hundreds of millions of dollars in assets, as well as dozens of employees.

A-Rod’s combination of business savvy and sports celebrity serves him well as an investor on Shark Tank and the host of CNBC’s Back in the Game, where he helps former pro athletes to find their financial footing.

“Most athletes get gamed,” Buffet added. “They’re pigeons, basically. They don’t have a nose for smelling out the people that are promoters rather than true friends. I don’t know if the term is used anymore, but we used to call them jock-sniffers.”

“They promote partnerships, the young kid is getting checks like he never dreamt of before. Sometimes even their agents may be in cahoots. That has not happened to Alex, and it wouldn’t happen to Alex. He’s got a bullshit detector that’s pretty damn good.”

High praise from Buffett is impressive regardless, especially for a guy who never went to college.

“I’m still a boy, and here I am having to play with people who are twice my age. I felt this fake bravado. Physically, I was ready, because I was a man-child. But not emotionally. “

“Then you go on this ascending road for 20 years, along the way you make hundreds of millions of dollars, it’s fucking hard to have some reality, some self-awareness.”

“In college, you get four years to get things out of your system, to grow, to learn. I don’t know what that’s like.”

So when did A-Rod develop that “money mind?” While he was serving his infamous season-long suspension for using performance-enhancing drugs in 2014.

“The sabbatical—my time off, when I served my suspension—really taught me things that I should have been learning at 19, 20, 21 years old,” he said.

Now the superstar-athlete-turned-business mogul (and fiance of Jennifer Lopez) lives a more lavish lifestyle than ever. In the same SI interview, he dished on run-ins with fellow celebs at this year’s Met Gala, most notably Kylie Jenner.

“We had a great table. The black guy from The Wire — Idris Elba, yeah, and his new wife. Some famous singer next to me, I don’t know what her name is,” Rodriguez told SI.

“Versace—Donatella. We had Kylie and Kendall. And we had an Asian gentleman from Rich Asians, the lead.”

Of course, the former Jenner became the world’s youngest self-made billionaire at the ripe age of 21 earlier this year, mostly thanks to the success of her makeup company, Kylie Cosmetics.

According to A-Rod, that’s all she talked about.

“Kylie was talking about Instagram and her lipstick, and how rich she is,” Rodriguez added.

His less-than-flattering comment on Jenner’s table banter definitely doesn’t come from a place of financial jealously.

SI’s Ben Reiter gleaned a glimpse of his wealthy lifestyle while aboard his multi-million dollar Gulfstream IVSP private jet, on which Rodriquez reportedly spends three full weeks per year flying in style while jamming to Journey and Bon Jovi.

It’s outfitted with 10 plush seats and a bed, as well as endless healthy snacks arrayed next to a single white orchid, WiFi, delicious shrimp cocktail and salmon filets served on green-rimmed Limoges china, and a smooth sound system that plays Rodriguez’s favorite bands, like Bon Jovi and Journey. “Ash!” he shouts out to an assistant, upon boarding. “Coldplay!”

Oh, and about that amazing rumor that he had a centaur painting of himself hanging over his bed?: “Never true.”