Report: Aaron Hernandez Was Allegedly Bisexual and May Have Killed to Keep His Secret

The former Patriots star reportedly even left a suicide note for a prison boyfriend. 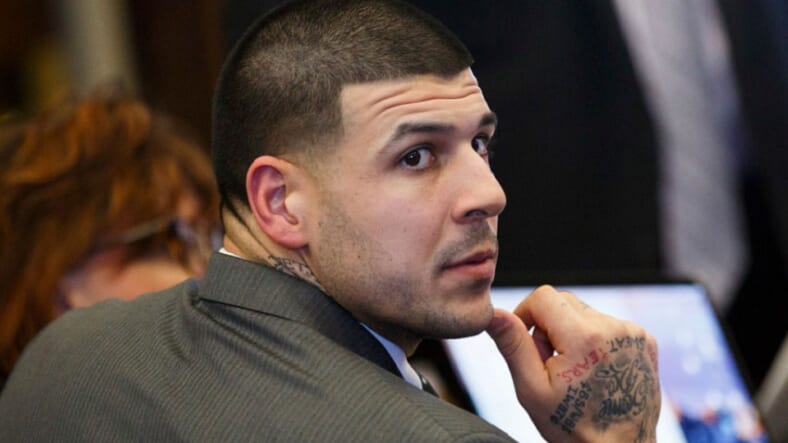 In an in-depth report published after Aaron Hernandez’s April 19 suicide in his prison cell, Newsweek revealed the one-time Patriots star may have committed murder to keep a deeply-held secret: He was bisexual.

Hernandez’s suicide was shocking for its timing, coming on the heels of his acquittal for a double homicide in 2012. While he was already in prison for life for murder of semi-pro football player Odin Lloyd, it was clear he had a crack legal team, and his attorney even thought he could challenge the Lloyd conviction.

But the Newsweek report revealed that among the letters Hernandez left behind, one was to a “prison boyfriend”—and that inmate is currently under suicide watch. As the magazine noted, Hernandez’s sexuality would be irrelevant, were it not for the fact that his relationship with a male high school classmate was central to understanding his possible motivation for killing Odin Lloyd:

Ernest Wallace, a co-defendant in the Lloyd murder case, told detectives the victim had called Hernandez a “schmoocher,” which was taken by Hernandez and his companions as a gay slur. Wallace was also recorded saying during a jailhouse visit with Tanya Singleton, Hernandez’s cousin, that he would not have helped Hernandez get rid of the murder weapon—a crime for which he is now serving a 4½-to-7 year sentence on accessory to murder charges—if he had known Hernandez was a “limp wrist,” multiple sources say. Singleton was accused of helping Wallace discard of Lloyd’s murder weapon and was later sentenced to two years probation with one year under house confinement after pleading guilty to criminal contempt for refusing to cooperate with investigators in Boston investigating the double murder. Prosecutors in both Bristol and Suffolk counties said Hernandez had promised to set up a trust fund for Singleton’s children for her silence but never did.

The former classmate reportedly testified before a grand jury. Additionally, when Hernandez began dividing money up among multiple bank accounts prior to his arrest for the Lloyd murder, the largest account was not for his fiancée or daughter, but for the alleged high school boyfriend.

It would be easy to believe Hernandez took his life knowing a major report revealing his secret was about to be published. However the Daily Mail reported that he planned his exit weeks in advance,  writing notes and giving away his belongings to other inmates.

There is evidence, as detailed in this Daily News report, that Hernandez’s behavior, up to his suicide, could have been heavily compromised by drug use.

However, researchers will also examine his brain for signs of Chronic Traumatic Encephalopathy, or CTE. The disorder—which has dogged athletes in several contact sports—could end up placing some measure of blame on the NFL, in the end.