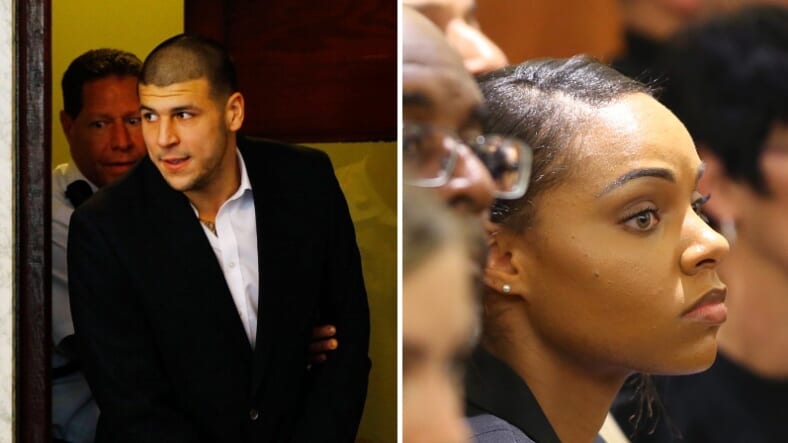 Prior to hanging himself in his cell at the Souza-Baranowski Correctional Center in Massachusetts in April, Aaron Hernandez reportedly wrote three suicide notes. CBS Boston tweeted the message the Patriots star turned convicted killer left for his fiancée, and it provides a strange and fascinating glimpse into Hernandez’s mind.

“I want you to live life and know I’m always with you,” Hernandez wrote to Shayanna Jenkins-Hernandez, “I told you what was coming indirectly.”

Hernandez emphasized his love for Jenkins-Hernandez and continued, “We split into two to come change the world. Your characteristic is that of a true angel and the definition of God’s love. Tell my story fully, but never think anything besides how much I love you.”

Hernandez closed by stating that his actions were part of “the almighty’s plan.” Then he wrote “YOU’RE RICH” in parentheses.

CNN reported that inmates who spoke with Hernandez didn’t necessarily sense he was planning his exit. “Since Friday’s verdict he had been talking about the NFL,” said one source quoted by the news network, “and going back to play even if it wasn’t with the Pats.”

Another, however, told of Hernandez coming to his cell and saying, “remember when you die your soul gets reincarnated.”

In telling Jenkins-Hernandez she was “rich,” the former tight-end may have been referring to quirks in Massachusetts law that could allow her to collect money that was owed to Hernandez by the Patriots prior to his conviction. If a defendant is unable to partcipate in appealing a sentence in the Bay State, their conviction can be vacated, effectively declaring them innocent in the eyes of the law.

In the end, Hernandez’s suicide may have been less about despair and more about ultimately getting away with murder, after all.