“Some Karen decided that my body was offensive to her and showed her child that her body could one day lead to her arrest.” 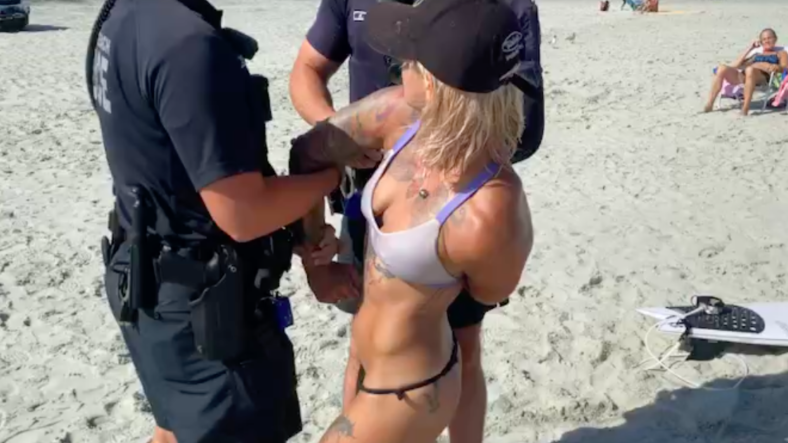 Sisqó sang “Let me see that thong,” in his 2000 hit “Thong Song” because apparently he’d never been on a South Carolina beach with his boo. Thong bikinis are not legal beachwear there, and world-famous acrobat Sam Panda found this out the hard way recently when the Pittsburgh native was cuffed while cavorting on Myrtle Beach.

Panda, who today lives in Taiwan, became famous in 2017 from a viral video of an accident in which she broke her neck. Sunday, she posted the 20-minute video of her encounter with Myrtle Beach PD on Facebook.

Panda made her feelings (which are obvious in the video) clear in a separate Facebook status:

If you are a woman, and you decide to call the police on other women for their bodies ON A BEACH, IN FRONT OF YOUR TEENAGE DAUGHTER…You have allowed a 105 pound woman to get rushed, aggressively grabbed, manhandled, and cuffed. You allowed two women to be slut shamed publicly on a beach for their bathing suits.And worst of all, you showed your daughter that her body is something she should be ashamed of and could be detained for. You showed her that a man can harm a woman over the way her body is viewed by other people. You have objectified a female body that does not belong to you and have showed your daughter that those actions are acceptable.You should be absolutely ashamed of yourself.#cancelMyrtleBeach

In a followup status later, Panda clarified what happened, writing that a “woman called the cops on me because of my bikini. That’s how this all started. Some Karen decided that my body was offensive to her and showed her child that her body could one day lead to her arrest.”

“Her body could be the reason a grown ass man violates her,” Panda wrote, referring to the complaining party’s child, “Her body is wrong.”

Panda is heard on the video responding to the police with shock, “You put me in handcuffs for wearing a thong!”

There is indeed an ordinance against certain kinds of beachwear on Myrtle Beach. From the city’s website:

So the good news is Sam Panda has clearly recovered 100 percent from breaking her neck.

The bad news is now that she has had her second viral moment, thong sightings on Myrtle Beach will definitely go down considerably. Sorry, Sisqó.