Strange things are afoot in the Utah desert. 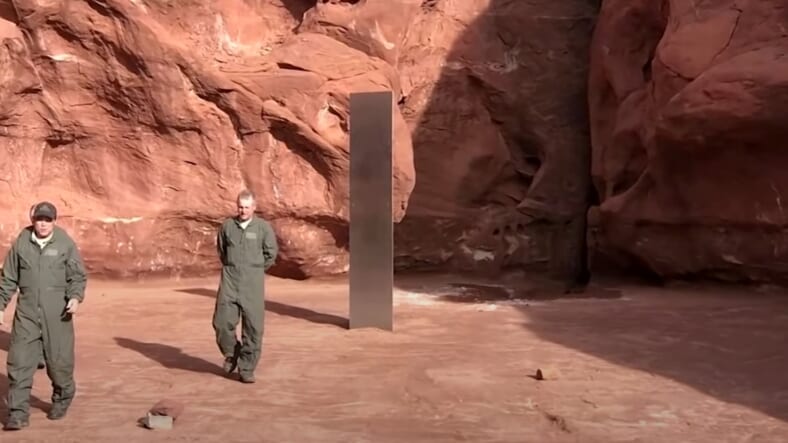 2020 has been the kind of year where someone might tell you a mysterious shiny metal pillar has been found in the remote Utah desert and the only response is, “okay, cool.” But even in this eventful year, the discovery of such an inexplicable and strange object is weird enough to make note of. Especially since it has also vanished since the Utah Dept. of Public Safety made the video above.

And according to the diligent detective types circulating around Reddit discussion threads about weirdness like this, the thing had actually been standing in the middle of nowhere for at least 5 years.

Utah state biologists were doing helicopter surveys of wild sheep in mid-November when they saw the 11-foot object jutting from the ground. It didn’t take long at all after the first reports about the mysterious monolith for people to start comparing it to the alien monolith in Kubrick’s 2001: A Space Odyssey and start looking for it themselves.

In a Reddit thread asking for help finding it, a Redditor with the colorful handle “Bear__fucker” posted the location after sleuthing it out on Google Earth. Via Barstool, here’s the Redditor’s explanation for how he or she found the monolith:

I looked at rock type (Sandstone), color (red and white – no black streaks like found on higher cliffs in Utah), shape (more rounded indicating a more exposed area and erosion), the texture of the canyon floor (flat rock vs sloped indicating higher up in a watershed with infrequent water), and the larger cliff/mesa in the upper background of one of the photos. I took all that and lined it up with the flight time and flight path of the helicopter – earlier in the morning taking off from Monticello, UT and flying almost directly north before going off radar (usually indicating it dropped below radar scan altitude. From there, I know I am looking for a south/east facing canyon with rounded red/white rock, most likely close to the base of a larger cliff/mesa, most likely closer to the top of a watershed, and with a suitable flat area for an AS350 helicopter to land. Took about 30 minutes of random checks around the Green River/Colorado River junction before finding similar terrain. From there it took another 15 minutes to find the exact canyon. Yes… I’m a freak

Between the time it was found by biologists and November 30, the monolith vanished, likely on November 27, when nighttime hikers saw a pickup truck near the area carrying something away. The Utah Bureau of Land Management announced the disappearance, writing that they “have received credible reports that the illegally installed structure, referred to as the ‘monolith’ has been removed from Bureau of Land Management (BLM) public lands by an unknown party.”

Apple Maps has 3D photogrammetry of the region, but sadly it seems the exact location of the monolith was shadowed at the time and thus there isn't a lot of detail: pic.twitter.com/bIKViFtF96

What was it? The common sense consensus is that it was an art installation, quite possibly by the late artist John McCracken, who said before his 2011 death that he always wanted to leave some kind of lasting piece of artwork in the desert. However, multiple attempts to determine the metallic tower’s origin indicated it was likely placed after McCracken’s death, as early as 2015, though other estimates said 2016.

Note: On December 1st, a day after this article was first published, the New York Post reported an eyewitness account of the dismantling and removal of the “monolith.” A man who was near the scene said it was taken down by four men who he felt were specifically there for the task. They removed it within 10 minutes or so, hauling off pieces with wheelbarrows. The same report also stated the inner structure was simple plywood, which might undercut any theories regarding extraterrestrial creators. Surely intelligent life that traveled untold distances to reach Earth wouldn’t be that cheap.

Still, if it was an alien probe, no one would blame the aliens if they used it to take stock of the Earth as it is in 2020 and decided this planet really wasn’t worth the trouble.