They tried (and failed) to body shame the activist actress. 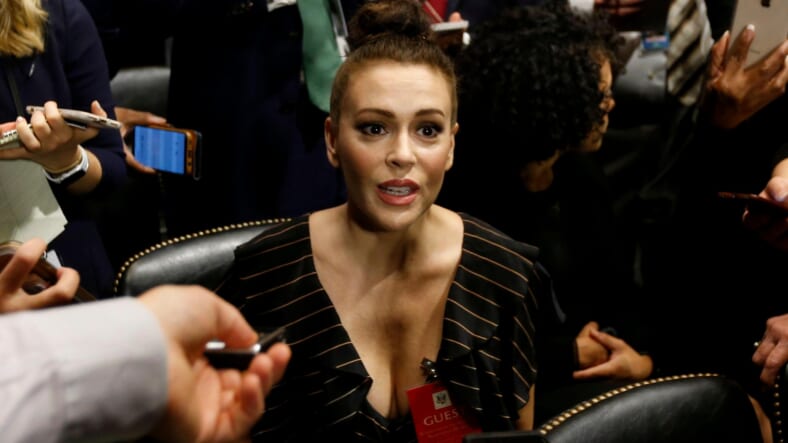 The actress, activist, and former Maxim cover model shot the Supreme Court justice nominee an ice cold stare and held up a booklet with a bold-font cover that read, “I BELIEVE SURVIVORS.”

But that didn’t stop internet trolls from criticizing her dress.

“Lets [sic] have the hypocritical black dress brigade tell us how victimized they are,” one snarky Twitter user wrote.

Really. I'm soooo sick & tired of a bunch of media stars who cant think beyond their own apparent #metoo moment. There are women who have to encounter REAL abuse. REAL Life & death moments. But yes lets have the hypocritical black dress brigade tell us how victimized they are

Incredulously, others mocked her cleavage and said she looked like a “vile [sic] disgusting old hag.”

Good grief! How can anyone take @Alyssa_Milano seriously the way she is dressed for this hearing. How disrespectful with that cleavage hanging out.#ChristineBlaseyFord https://t.co/2YtzaIbSXd

None of those insults went viral. But one tweet from Entertainment Tonight writer Meredith Kile did rack up 120,000 likes (and counting) from people who appreciated a clever reference to Milano’s stint as a TV witch on the beloved show Charmed.

I've never wished so hard that Alyssa Milano was a real witch. pic.twitter.com/Oqaw7210eq

More of Milano’s defenders called critics of her attire “part of the problem” and pointed out the irony of fixating on a woman’s clothing during a a discussion about sexual assault.

If you’re going to attack @Alyssa_Milano for her OUTFIT, you’re part of the problem. Women can wear whatever they want and your reaction is not their problem.

Yikes. You didn't just tweet about what a woman was wearing while a man is being accused of sexual assault?

You looked completely appropriate and lovely! I’m so tired of people telling women how to dress. As a 40 year old woman I’m quite capable of deciding what is and what is not appropriate attire for a given situation. As of course are you!

One thing’s for sure: No one can rightly attack Milano for standing up for what she believes in.