Is the decades-long mystery finally solved? 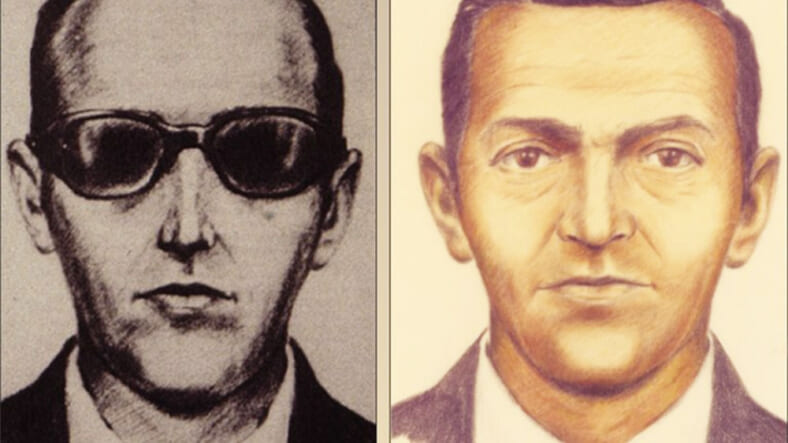 When a man who called himself Dan Cooper—not D.B., that was a mistake by a reporter—jumped out of a plane on November 24, 1971, he left one hell of a mystery behind. Now amateur investigators seeking his real name believe they’ve found it in a code Cooper allegedly embedded in a taunting letter to a Portland, OR newspaper.

To the passengers and air crew who saw or spoke to Cooper the night of his crime, he looked like a regular businessman: trim, well-dressed, drinking bourbon—his normality was part of his disguise. But he hijacked the plane, received his requested ransom of $200,000 and a parachute, and he was gone. The daring crime and the fact he was never caught made him a folk hero.

Cooper has driven professional and amateur investigators bananas for decades. In fact, the FBI just gave up. A note appended to a 2007 agency article about the hijacker reads, “The FBI has redirected resources allocated to the D.B. Cooper case to focus on other investigative priorities.”

“We’re over this guy,” basically. Amateur investigators, including some with legitimate credentials as investigative journalists, haven’t given up. Tom Colbert is one of the most dogged sleuths, and he believes that with the assistance of a code breaker, he’s uncovered Cooper’s real name.

MSN reports that Colbert obtained a letter from the FBI that Cooper allegedly sent to the Portland Oregonian in March of 1972. It was a middle finger to everyone searching for him. “…I am not dead but really alive,” it read in part, “and just back from the Bahamas, so your silly troopers up there can stop looking for me.”

“That is just how dumb this government is,” the writer continued, “I like your articles about me but you can stop them now. D.B. Cooper is not real.”

If Cooper really was the author then all the above is pretty fun for anyone who does see him as some kind of hero. But TV producer Tom Colbert and Rick Sherwood, an ex-Army codebreaker, believe the most important part of the letter is in the second paragraph. From MSN:

“I want out of the system and saw a way through good ole Unk,” he writes. “Now it is Uncle’s turn to weep and pay one of it’s own some cash for a change. (And please tell the lackey cops D.B. Cooper is not my real name).”

Colbert and Sherwood say key phrases in the letter tell the real tale.

[Sherwood] spotted four phrases or words that were repeated throughout the note, including “D.B. Cooper is not real,” “Uncle” or “Unk” referring to Uncle Sam, “the system,” and “lackey cops.”
“D.B. Cooper” and “lackey cops” appeared in the same sentence, “as did “Unk” and “the system,” suggesting to Sherwood that the coded messages could be contained in those sentences. He decoded “through good ole Unk” to mean “by skyjacking a jet plane,” using a system of letters and numbers. “And please tell the lackey cops” was decoded to mean “I am 1st LT Robert Rackstraw,” according to Colbert.

Rackstraw is not a new suspect, and he’s a plausible possibility. He certainly had many of the skills Cooper might have needed to pull off his heist.

At the same time, I’ve been reporting on crime and writing true crime for 13 years, and there are several types of supposed evidence that always press my skeptic button. One is stealthily hidden codes in otherwise normal texts.

Why? They’re honestly just too convenient. They also give the letter writer far too much credit. Even though he masterminded an impressive and audacious crime, that doesn’t mean Cooper would be meticulous enough to potentially out himself with a clever little code.

Thinking he did and that the code proves Rackstraw was Cooper feels too much like wishful thinking.

But you never know.

Whoever Cooper really is (if he’s not Robert Rackstraw), he’s probably sipping a fine bourbon and laughing to himself about all the speculation.