He may have been forced to make a formal apology. 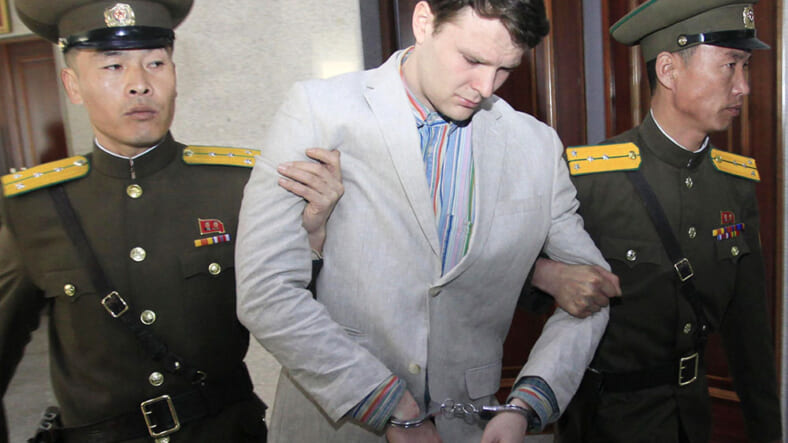 The crime University of Virginian undergrad Otto Warmbier allegedly committed was the innocent sort of pilfering Americans might do as a joke in any other country and get away with it. But Warmbier was on a trip to North Korea, and nothing is a joke in the hermit kingdom. That’s why Warmbier, a 21-year-old from Ohio, now faces 15 years at hard labor in North Korean custody.

Warmbier supposedly tried to steal a piece of North Korean propaganda, a banner, to give to an acquaintance in the United States. Under the communist dictatorship’s onerous legal system, this was considered an act of “subversion,” reported the Associated Press. It took North Korea’s Supreme Court just an hour to convict the student.

Warmbier’s case is troubling on several levels, including his strange explanation for what prompted the act that ended with him custody:

He said he was offered a used car worth $10,000 if he could get a banner and was also told that if he was detained and didn’t return, $200,000 would be paid to his mother in the form of a charitable donation.Warmbier said he accepted the offer because his family was “suffering from very severe financial difficulties.”

The AP reported that Warmbier stated he “had been encouraged by the university’s ‘Z Society,’ which he said he was trying to join.”

“Z Society” is real and has been described as a “semi-secret ring society” that performs philanthropic functions and holds special dinners.

Warmbier’s troubles are compounded, as the AP noted, by the fact that Washington has no diplomatic connection with Pyongyang and tensions between North Korea and the U.S. are high. Early Tuesday yet another small earthquake was detected inside the secretive country—in the past, this has been evidence that Kim Jong Un’s military was testing large explosives, up to and including low-yield nuclear weapons.

Americans who have fallen afoul of North Korea’s paranoia and draconian laws have been brought home before serving full sentences in the past through tricky and careful diplomacy—we hope Warmbier catches a break soon, just as they did.