This viral video has people raging against the guys who baited the bear. 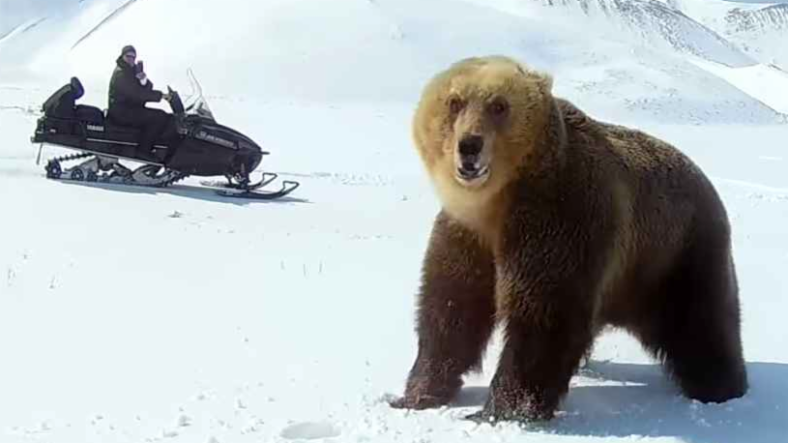 Bears are NOT our friends, people. Remember that movie Grizzly Man? About the guy who tried to live with wild grizzly bears on an Alaskan preserve? Yeah, they ended up eating him.

The latest bit of video evidence of bear badassery comes via this viral clip of snowmobilers trying to chase a bear away from their fishing camp in Russia’s Kuril Islands. These yo-yos film themselves trying to scare the massive brown bear away by zipping by it in their machines amid the striking arctic scenery. But one rider gets way too close, and the angry bear takes a swipe with his paw. If the animal connected, it’s a good bet that the dude would now be missing a head.

Not only are countless YouTube commenters blasting these knuckleheads for straight-up baiting the bear, but a Russian wildlife official said they actually woke up the bear from hibernation and were harassing the beast, reports the Siberian Times.

The footage from Paramushir island brought a rebuke from the Deputy Minister of Forestry and Hunting, Danila Dudarev.

“This bear is not dangerous,” he said. “It has woken and is looking for food. The beginning of spring is quite a stress for the animals and people who chase a bear like this are acting unethically.”

“This is the outrageous, unconscious behaviour of adults who, in pursuit of beautiful footage, for the sake of entertainment, chase the wild beast. Getting in contact with the bear, they do everything to make the predator lose fear of people.”

“In future, this animal can throw out aggression on someone who will not be able to leave on a snowmobile. In April and May, bears go out from their dens. They are not dangerous, if people do not tease or chase after them.”

Let that be a lesson to you: If you mess with the bear, you just might get the claws.