The disgraced ex-congressman could also spend the rest of his life as a registered sex offender. 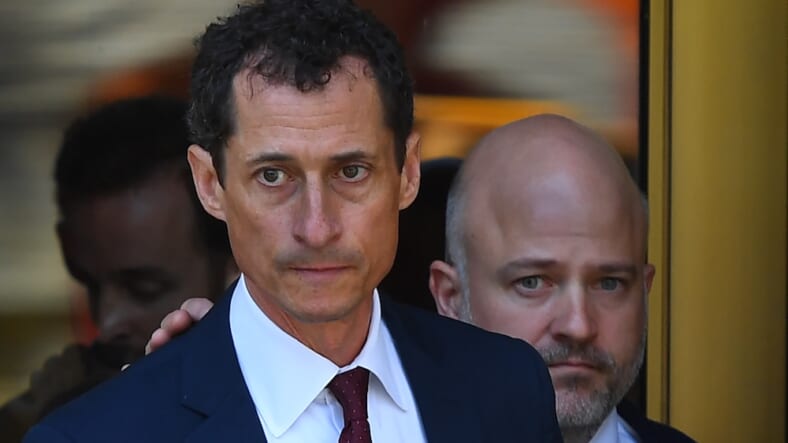 He begged. He pleaded. He even cried in court. But at the end of the day, it was all to no avail. Disgraced former congressman Anthony Weiner, who pleaded guilty in May to sexting with a 15-year-old girl, was sentenced on Monday to 21 months in prison on federal charges of sending pornography and sexually explicit messages to a minor. Here’s some background via Daily Beast:

Weiner, 53, resigned from Congress after tweeting an explicit photo from his account in 2011. Two years later, sexting revelations derailed his mayoral bid in New York. He continued his reckless behavior even after encountering a high-school student, and sexted with a Trump supporter while wife Huma Abedin was on the campaign trail with Hillary Clinton. At the time, Abedin said she had forgiven her husband, and that the couple was “moving forward” with their young son.

Abedin finally filed for divorce after his guilty plea. “Weiner, a grown man, a father, and a former lawmaker, willfully and knowingly asked a 15-year-old girl to display her body and engage in sexually explicit conduct for him online,” prosecutors wrote. “Such conduct warrants a meaningful sentence of incarceration.”

Of course, his lawyers asked the judge for leniency, but that fell on deaf ears as well. As Daily Beast reports:

“Anthony had already repeatedly been ruined by scandals in which his ‘confidential’ adult counterparts reported their explicit encounters to the tabloids,” his lawyers pleaded. “He responded as a weak man, at the bottom of a self-destructive spiral, and with an addict’s self-serving delusion that the communications were all just Internet fantasy.”

In a letter to the court, Paul Kelly, a psychotherapist who said he’s been treating Weiner for nine months, said he suffers from “sexual compulsivity problems, sometimes referred to as ‘sex addiction.’”

“In Anthony’s case, his negative sexual behavior has revolved around sexually explicit communications with strangers on the internet,” the counselor, Paul Kelly, wrote.

“For him, communication and affirmation are his goals, not actual physical sexual contact, and the communications he has sought have consistently been with consenting adults. The exchange he had which crossed legal boundaries was an anomaly.”

Only time will tell if Weiner will finally learn his lesson after spending over a year and prison, but as we’ve mentioned before, pervs are gonna perv.