The ex-congressman is going to jail for 21 to 27 months—and getting divorced. 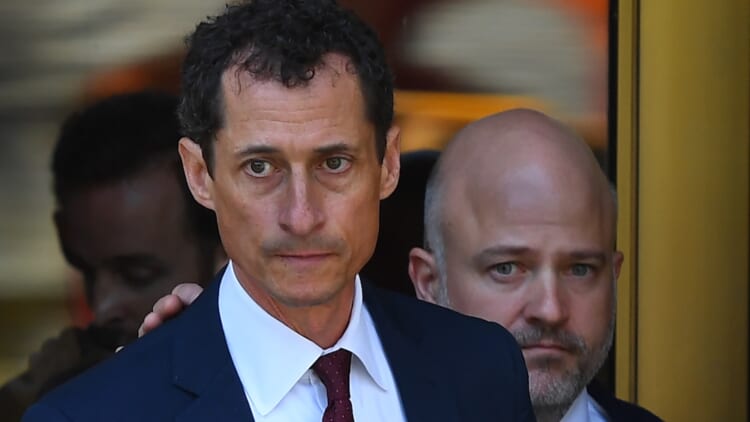 Disgraced ex-congressman Anthony Weiner will have to register as a sex offender and give up his iPhone after pleading guilty Friday to a charge of transmitting sexual material to a minor. The 52-year-old, whose inability to stop texting pictures of his junk to women he met online ruined a once-promising political career, faces 21 to 27 months in prison.

The scandal that brought down Weiner was the months long texting relationship he had with a 15-year-old high school sophomore in North Carolina.“I am guilty, your honor,” Weiner, who also has to give up his iPhone, said through tears. “I knew this was as morally wrong as it was unlawful.”

Weiner first came under FBI investigation for creeping on the high school student last September after she shared screen grabs and photos with the Daily Mail. That investigation resulted in former FBI Director James Comey’s now-infamous letter to congress sayingnew emails from Hillary Clinton were found on Weiner’s laptop. Those emails contained nothing of interest to the FBI, but Clinton still blames Comey’s announcement for Donald Trump’s victory in the presidential election.

In addition to the legal troubles, Weiner is soon be dealing with divorce. His wife and former Clinton aide Huma Abedin has finally field divorce papers after years of betrayal.

Weiner’s first sexting scandal broke in 2011 after he tweeted a picture of his junk to a Twitter follower. He later admitted to exchanging “messages and photos of an explicit nature with about six women over the last three years” and resigned his seat in Congress.

Two years later he emerged as a viable contender in the race to serve as New York City’s mayor. But his campaign was derailed after he was busted exchanging sexts with Sydney Leathers, a young woman from Indiana. Weiner used the racy pseudonym “Carlos Danger” in the texts.

In the summer 2016, Weiner was back in the tabloids for sending sexy pics to ladies who weren’t his wife. To make matters worse, his son was in these pictures. And then in September, the Daily Mail published its bombshell about Weiner’s underage texting friend.

If the pattern holds, expect to see him back in the headlines just as he’s released from jail. He may have had to give up his iPhone, but pervs are gonna perv and Weiner will find a way.