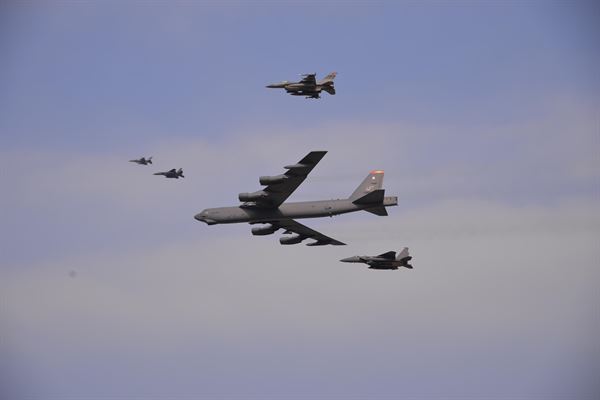 After the Hermit Kingdom gleefully announced to the word that it had successfully detonated a hydrogen bomb (despite inconsistent evidence, according to experts), the U.S. Air Force flew a nuclear-capable B-52 Stratofortress bomber from Guam to perform a flyover at Osan Air Force Base near the demilitarized zone that seperates North and South Korea, CNN reports.The B-52 Stratofortress, the long-range, heavy bomber favored by the U.S. military for delivering nuclear or conventional ordnance, wasn’t alone: two U.S. Air Force F-16C fighters and two South Korean F-15K warplanes joined the bomber before the latter returned to Guam.

It is not known to news agencies whether the bomber was armed during the flyby, but U.S. Pacific Command wrote in a statement that the flyover was in response to North Korea’s recent nuclear test.

“This was a demonstration of the ironclad U.S. commitment to our allies in South Korea, in Japan, and to the defense of the American homeland,” Adm. Harry B. Harris Jr., commander U.S. Pacific Command,’ said in a statement.  “North Korea’s nuclear test is a blatant violation of its international obligations. U.S. joint military forces in the Indo-Asia-Pacific will continue to work with all of our regional allies and partners to maintain stability and security.”

The government of North Korea responded to the flyover as a move destined to send the U.S. to “edge of war. UPI reports that North Korean officials verbally decried the U.S. as “stupid” and claiming that American ideals “will always be a crazy dream.”

The U.S. may send additional weapons to South Korea as part of that commitment, Reuters reports, but until then, the nuclear flyover is a great way to send a message to North Korea: We see you.