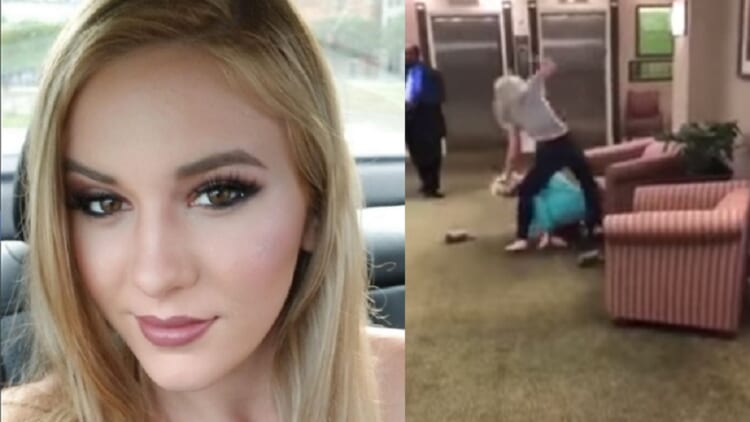 South Florida resident Colleen Dagg just became an internet hero for a righteous reason. In the above viral video of her beating the snot out of a much larger woman in a hotel lobby, one thing becomes clear: Dagg won’t tolerate racism and is ready to use her fists to make that point.

NBC Miami reports the video was made in the lobby of a La Quinta in Coral Springs, Florida early this week. It rapidly rose to a half-million views once it was posted online.

The video shows a heavyset woman and Dagg—who already appears to be quietly angry when it begins—having words, the woman pacing and Dagg seated, removing her shoes.

Then the other woman, whom Coral Springs police said was 39-year-old Summer Cortts, makes the mistake of getting in Colleen Dagg’s face. What happens next is fierce and fast, as Dagg takes Cortts out then continues pounding her, shouting about Cortts saying “racist shit” and putting her hands on Dagg.

It’s intense, and it’s clear that the security personnel in the video don’t exactly know what to do about it, at least at first.

Dagg spoke to the NBC station about the confrontation:

“I heard something she said and walked out of the building and thought about it for a second and walked back inside to the counter calmly and asked her if I heard her correctly, just like I’m talking to you, no attitude. She said ‘don’t worry about it, I’m not black,'” Dagg said. “[She said] ‘you guys need to do something about all these wet floors over here, you know how these Haitian people are.’ To me she was inferring that Haitian people are more likely to sue somebody than another race.”

Dagg also said, in no uncertain terms, that it was her “job as a white person to correct that in another white person.”

Dagg elaborated on her perspective in a statement posted on Instagram Friday.

The police charges against Cortts make it clear that Dagg was in the right to defend herself—in addition to being heroically anti-racist. A South Florida TV station reported Friday that Cortts has been charged with “Disorderly Conduct and Inciting an Affray.”

Dagg refused to press a simple battery charge against Cortts.

She probably didn’t press that charge because she’d delivered plenty of justice on her own.

It’s understandable that social media reaction has largely been pro-Colleen:

"I'm going to take my shoes off just in case I need to defend myself" – Collen Dagg, Patriot. #WonderWoman #FridayFeeling https://t.co/Orkft6r8WU

Violence is bad. Colleen Dagg may have just proven that every now and then, it’s just necessary.

Dagg is younger than Ronda Rousey, but we’d still totally be down with Rousey playing her in a reenactment of that video. Just saying.