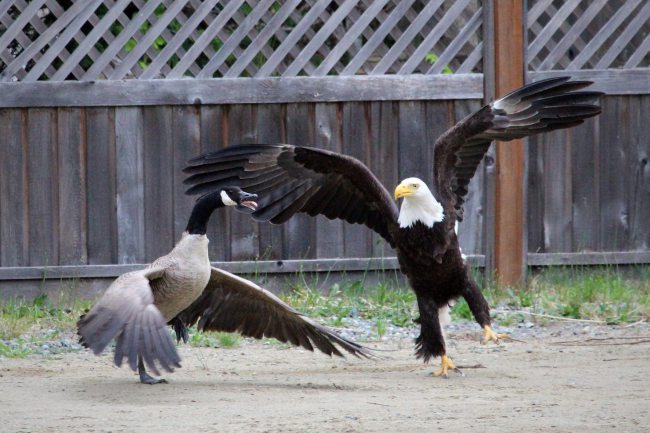 America and Canada have been close allies for decades, often acting in wars overseas as brothers-in-arms. So it was one hell of a surprise recently when photographer Lisa Bell captured these images of an epic skirmish between a bald eagle and a Canada goose, the high-flying symbols of our neighboring nations.

Bell posted the photos in a Facebook group for Vancouver Island Images with a simple comment: “You don’t always get to keep what you catch.” She appeared to be addressing the eagle, as the order in which she posted the photos illustrated less of a fight and more prey (the goose) managing to flee predator (the eagle, of course).

Here, a closer look at this bird-on-bird beatdown.

After the goose got his gander up in the top photo above, the eagle humiliates it and pins the Canadian to the ground.

The goose then manages to free itself of the eagle’s talons, and flees to safety, even with the eagle screaming vengeance in hot pursuit.

In responding to comments on the post (which contains a few more photos), Bell said she caught this battle royale around 7:15 in the morning and that she felt the story behind her photo play was that “so much nature is not all glory all the time.”

“[We] had a happy ending to the tale of a goose freeing it’s self from a hungry Eagle talons,” Bell wrote, but that goose “might not be so lucky next time.”

We suspect she’s right. The eyes of the eagle are always on watch, and it never forgets.