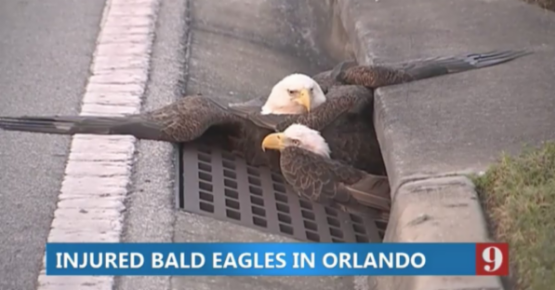 Two mighty bald eagles recently had a humbling run-in with a storm drain in Florida.

On witnessing the stunning sight of two bald eagles duking it out in-flight, one eye-witness told ABC-affiliate WFTV that they “just dropped right into the drain, so I immediately pulled over.”

As onlookers and an animal rescue team arrived on the scene, one of the eagles shielded the other for 30 minutes before eventually flying away.

The response to the incident on social media has been pretty one-sided, many seeming to see it as a political metaphor.

What’s most important—to patriots and animal-lovers alike—is that after an arduous 90-minute rescue attempt, the injured bird was safely retrieved from the drain.

The Washington Post reports on how the predator got out of its jam:

Covering the bird in a blanket, rescuers placed it in a box to take it to a sanctuary to be treated. The bird suffered puncture wounds on its body, leg, and chest, as well as a cracked beak, and was expected to require up to six weeks of recovery before being released back into the wild.

Watch ABC’s coverage of the feat below:

While many social media responses were just people making the same joke over and over, some were pretty funny.

A bald eagle is currently in a gutter in Orlando. More evidence that Florida hates America! pic.twitter.com/DL6Psc60fs

There were plenty of tiresome remarks directed at politicians, but the eagle is going to be just fine, it’s a tough, true survivor. That’s symbolic enough.