A TV Reporter Grabbed a Woman’s Boob to Move Her Off-Camera, and the Internet Definitely Has Some Opinions 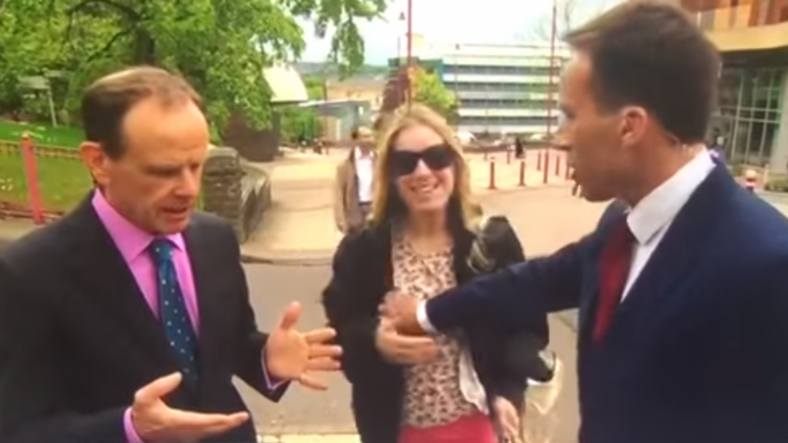 But the BBC correspondent in the clip above is under unusually intense scrutiny after he attempted to move a woman off-camera during an interview by pushing her square in the boob. She retaliated by slapping his shoulder and then walking away.

Whether he simply misplaced his hand in the heat of the moment or intentionally cupped grabbed her breast is the big question. But one thing’s for sure, people sure are talking about it.

From the camera’s angle, it almost seems as if he looks right at at her, sizes her up, and then decides to place his hand on her chest anyway.

But the reporter, Ben Brown, claims that the breast feel was totally unintentional.

We’re inclined to believe him, as his mind was probably on whatever the hell he was talking about. The replies to his explanation indicate a pretty intense debate online:

you'll find it hard to justify physically moving someone away, let alone by grabbing an intimate area. pic.twitter.com/lCI9JQ7zAF

Sorry, were they on private property? Is it against the law to stand in shot of the BBC? If not, he shouldn't have laid hands on anyone

And some people are just desperate to excuse unacceptable behaviour..

You looked first at where you were putting your hand! How can that be unintentional?

Are you for real? She slapped his shoulder because he grabbed her breast… I'd of given him a black eye!

We’ll give you the benefit of the doubt this time, Benny boy, but if it happens again you’re shit out of luck.