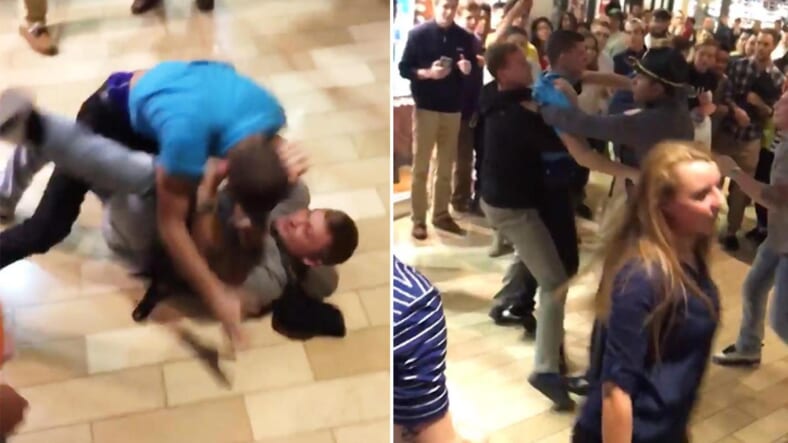 As the New York Daily News notes, the day after Thanksgiving has been a popular shopping day since 1952. More recently though, it also became the day on which discount-hungry shoppers gather in crowded public places to fight strangers, while sane people stay home to shop online. And thanks to the ubiquity of smartphones, we have the video to prove it.

Black and Blue Friday is off to a fast start in 2017. A mall in Alabama was forced to close early Thursday night after a brawl broke out and a man was shot in mall parking lot in Missouri. Still, we haven’t yet heard about anything that matches the insanity of these all-time great Black Friday brawls.

1. Philadelphia Fight ClubA garden variety Black Friday brawl in the City of Brotherly Love turns truly crazy when one of the hair pullers pulls out a stun gun. Ouch.

2. Ass-whupping in Annapolis, MarylandThis fight outside a Victoria’s Secret star apparently started after an “accidental bumping.” Damn, yo.

3. The Modesto Mall BrawlHard to say it better than this video’s narrator at a Modesto mall: “Damn. Shit. Shit. Goddamn. Look at this shit. What the fuck? Oh!”

4. The Texas Towel SmackownHow much do you like towels in Atlanta, Texas? Bet it’s not as much as these truly wild Wal-Mart shoppers.

5. The Shame of Saginaw, MichiganThis embarrassing scramble for Black Friday swag gets even more shameful when grown woman rips a box from a young boy’s hands. Watch til the end for the slow motion replay.