Bill Cosby May Have Just Lost His Biggest Ally

“This [criminal charge] is him reaping what he’s sown.” 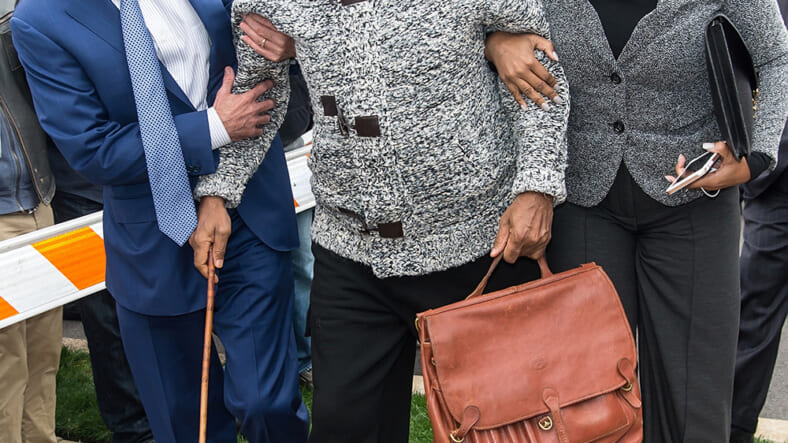 In the past several months, nearly 60 women have come forward accusing formerly beloved comedian Bill Cosby of sexual assault. These allegations stretch back more than 50 years and include drugging, fondling, and outright rape. The comedian has become probably the most reviled entertainer in American culture.

Despite all of this, one woman has stood by Cosby as the disgraced comedian claimed innocence: Camille Cosby, his wife.

But no longer. Cosby’s wife of more than 50 years is reportedly “livid and humiliated” by the onslaught of charges against her husband, which culminated on December 30th when Pennsylvania prosecutors charged Cosby with three counts of sexual assault in a 2004 case, the first criminal charges he’s actually faced since new allegations surfaced last year. Cosby was arrested, perp walked, forced to surrender his passport, and released on $1 million bail.

Noticeably absent at his arraignment, according to the New York Post‘s Page Six? Camille Cosby.

“My husband doesn’t deserve jail, but he does deserve every bit of the hell he’s going through now even though he is still pretending that this hell doesn’t exist,” Camille reportedly told a close family friend, who relayed her words to Page Six.

For Camille, this reversal is shocking. The wife of the comedian has stood by her man since allegations of sexual assault first started making national headlines in 2002. But even though she’s legally protected from testifying against her husband (and has been excused from depositions in unrelated cases), it appears that with Bill’s humiliating perp walk, Camille Cosby has endured more than she can bear.

“But, she has been thoroughly humiliated and believe me, her anger isn’t directed at the women,” the source added to Page Six. “Bill has humiliated her, and the affairs he’s had have gotten out of hand and this [criminal charge] is him reaping what he’s sown.”