Elon Musk Vs. Bill Gates: Who Ya Got?

Now that Musk has passed Gates as the world’s second richest man, which billionaire genius do you admire more? Go to Versusgame.com on your phone to vote now! 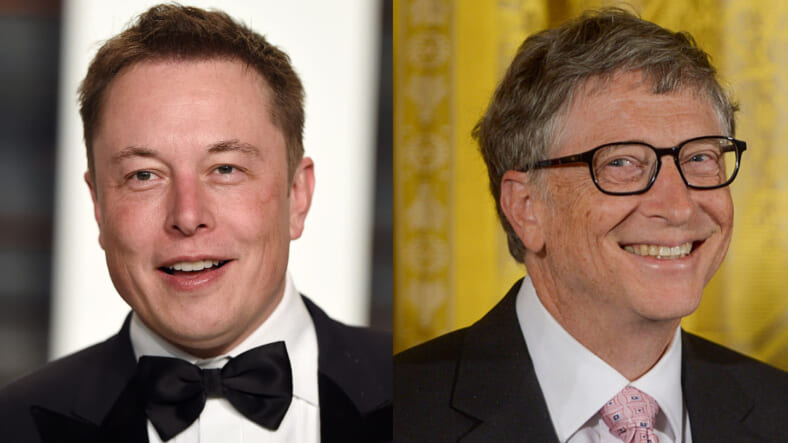 Amazon’s Jeff Bezos may still reign as the world’s richest man with an insane net worth of $181.4 billion, but Elon Musk is increasingly hot on his heels. In January 2020, Musk was the 35th-wealthiest man on the planet, but earlier this week the Tesla mogul shot to second-richest, edging out Microsoft founder Bill Gates.

Musk has Tesla to thank for his new position, as Bloomberg reports the electric vehicle mastermind’s “net worth soared $7.2 billion to $127.9 billion, driven by yet another surge in Tesla’s share price.”

Gates, who boasts a net worth of about $127.7 billion, would likely be much richer had he not donated so prodigiously to charity over the years. He has reportedly given more than $27 billion to his namesake foundation since 2006 alone.

But Musk—who is notably less charitable than Gates—may start pulling away from the Microsoft founder when it comes to net worth. In addition to Tesla and his commuter transportation startup The Boring Company, CNN notes Musk also “oversees SpaceX, the space exploration firm that recently kicked off a landmark mission with NASA,” and some “believe there’s still room to run with his company’s stock.”

While Musk and Gates are both straight-up geniuses and super-rich billionaires, which iconic business titan do you respect more? Go to versusgame.com on your phone to predict the winner of this challenge and other fun face-offs!