This is definitely the craziest sh*t you’ll see all day. 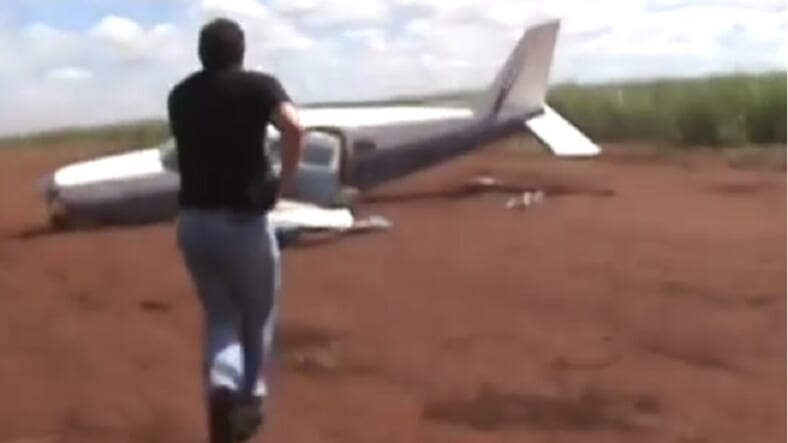 This incredible footage of Brazilian authorities stopping a plane suspected of carrying contraband tells viewers one thing: Do not screw with law enforcement in Brazil, because they will do a kamikaze run directly at your mode of transportation to take you down.

This footage, first posted on Reddit, is pretty straightforward. A car loaded with plain clothes police is charging down a dirt runway after a small plane taxiing to get the hell out of Dodge. In Portuguese the driver narrates what he’s about to do—ram the wing—and tells someone to not shoot, just to take one down and he’ll take the others.

Then the collision happens and of course cops shouting for perps to hit the deck has a recognizable tone in any language.

While the original poster on Reddit said we were seeing the interdiction of a “drug plane,” a commenter who provided a translation for the dialogue wrote that the plane was actually thought to be “loaded with electronics coming from Bolivia, Colombia or Paraguay.”

If true, this is an issue because “the electronics came from another country and didn’t go through Brazilian customs. They’d have to pay something like 40%-60% of the price in taxes.”  Smuggling like this to avoid the tax issue is apparently pretty common.

Drugs or electronics, it’s obvious the men giving chase were willing to stop at nothing to get their suspects. If you’re ever heading to Brazil, make sure you have everything in order.