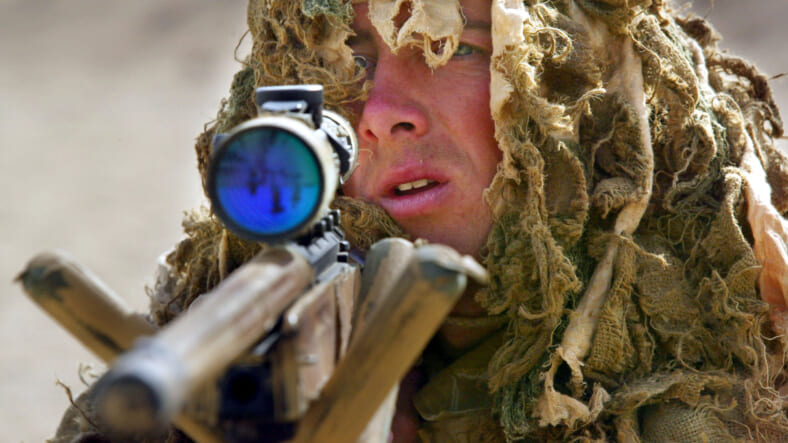 Remember the incredible British sniper who took out five ISIS suicide bombers with just three bullets in December? It looks like he may have some competition.

A different SAS sniper reportedly took out three ISIS bombers by shooting through a 10-inch thick concrete wall from more than 1,000 meters away with “the world’s most powerful rifle,” the Daily Mail reported on Sunday.

The sniper reportedly fired “20 armor-piercing rounds from his Barrett Light .50 calibre rifle into a two-story command post” in the city of Ramadi, an ISIS stronghold recently liberated by the Iraqi military.

Here’s exactly how the operation went down, according to Mail sources:

“They looked at a rocket attack, but there was the possibility that the blast might cause the building to collapse and intelligence suggested there were civilians being held in the lower story and in building close by. A staff sergeant in charge of one of the SAS teams working with the Iraqis came up with the idea of shooting through the wall.It was a case of ‘there’s nothing left to lose.'”The sniper set himself up in another building around 1,000 meters away and fired into the command post, leaving of of its walls almost completely destroyed.When the SAS and Iraqi forces stormed the building later that day, they found a scene of gore and chaos.A source said: “The armor rounds had a devastating effect. The bodies of the Islamic State fighters had been absolutely pulverized. One had been decapitated and another had been cut in half. It was a real scene of carnage — but the tactic proved incredibly effective.”

Based on the information provided to the Mail it appears that the unnamed sniper was part of the protracted campaign to liberate Ramadi, a strategically-important ISIS stronghold, from the grip of the bloodthirsty militants. The Iraqi military, supported by Western airstrikes, only just eked out at major victory against ISIS in the city at the end of December.

The anonymous sniper, considered “one of the best in the special forces” according to the Mail, is part of an “elite team of military advisers” sent to support the Iraqi army as the country’s military pushes back against the Islamic State militants sweeping through the country.

According to the Mails‘s military sources, the heroic sniper saved at least 20 lives. Here’s hoping some friendly competition with his fellow SAS sharpshooters will save many more.