Katy Perry, Dana White, Chris Evans and Other Celebs Are Rallying Around This Young Bullying Victim

The video of Keaton Jones has gone viral and made international headlines. 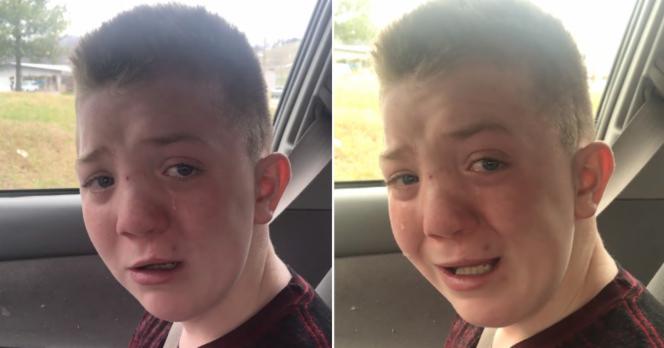 Video of a Tennessee boy’s tearful plea to bullies has made international headlines and inspired celebrities to reach out.

The New York Post reports that Kimberly Jones picked her son, Keaton, up from school because he was afraid to face his aggressors at lunch.

He was visibly upset as he described the actions of his mean-spirited schoolmates.

“They made fun of my nose, the called me ugly, they say I have no friends,” he says.

“[They] poured milk on me, put ham down my clothes, [and] threw bread at me.”

Even as he fought back tears, Keaton remained optimistic about his situation.

“If you are made fun of, just don’t let it bother you. Stay strong, I guess. It’s hard, but it will probably get better one day.”

The now-viral video has been circulated non-stop since it was first posted. Countless celebrities have offered words of support. Some, like Avengers: Infinity War actor Chris Evans, even invited Keaton to hang out.

Stay strong, Keaton. Don’t let them make you turn cold. I promise it gets better. While those punks at your school are deciding what kind of people they want to be in this world, how would you and your mom like to come to the Avengers premiere in LA next year? https://t.co/s1QwCQ3toi

“While those punks at your school are deciding what kind of people they want to be in this world, how would you and your mom like to come to the Avengers premiere in LA next year?” Evans tweeted.

Actress Hailee Steinfeld came forth with a particularly tempting offer: a date at the premiere of Pitch Perfect 3 this Tuesday.,

Meet Keaton Jones a very smart little boy who is being bullied at school. This video is heartbreaking!! I want to bring Keaton to Vegas and hang out at UFC Headquarters. If anyone knows how i can reach the family please let me know. Thank u everyone pic.twitter.com/BR8c4ldDFc

Thank u all for helping try to find Keaton. 1000% greatest post and response in my social media history. This kid is special and we all feel it. Dying to meet him!!

@DonteStallworth @Lakyn_Jones hopefully my video and the tweets that Keaton have been getting brings awareness to bullying and how serious it is in our school system pic.twitter.com/1Dujv3RxA5

buddy next time I make it home to Knox I'm going to walk into that lunchroom with you and watch the bullies say they are sorry to you. you don't deserve that. keep your head up and continue to be kind…you will always Come out on top. sending a hug. https://t.co/fZn2hbMPKp

Keaton, I got your back. I am getting ready for my fight, but say the word and I’m there. Come be a part of of my training camp. You’re not alone. Anything you need I got you! https://t.co/yJY22jq4cd

i need each and everyone of yall to repost & retweet this! #XSCAPE #KeatonJones pic.twitter.com/HEgelrqMdU

“Courage is fire, and bullying is smoke.” Stay strong Keaton, you’re a very brave young man and a lot of great folks have your back. @Lakyn_Jones if there is anything we can do for Keaton, please let us know. #StandWithKeaton #StopBullying

Additionally, a GoFundMe campaign has raised over $55,000 for Keaton’s future education.