These were seriously bad ideas. 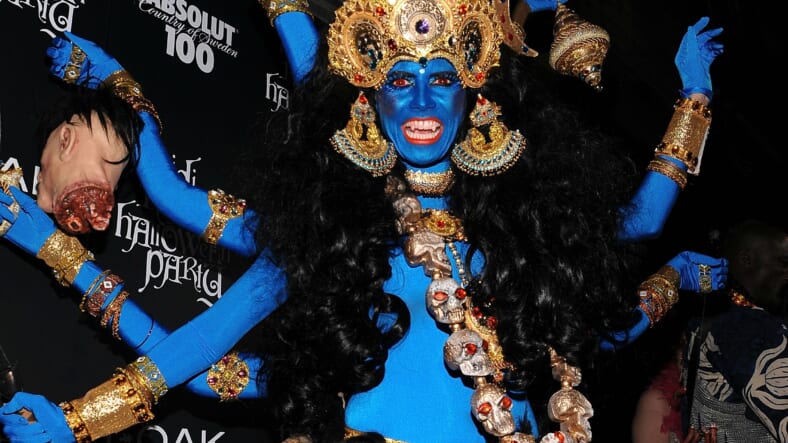 For all its spookiness, Halloween is one of the best days of the year. People celebrate by dressing up in silly costumes and eating tons of candy—it’s hard to think of anything bad about that. Celebrities do the former better than anyone, and always bring their A-game when it comes to incredible costumes.

For example, this year, Rita Ora probably won Halloween by dressing up as Post Malone:

Ima get Halloween started for you the right way… postttyyyyyy I LOVE YOU BRO @postmalone…ratatatatataata wassssss gooood!! And this is also a BIG thank you to getting me to 14 million!

And Halsey was scary-hot as Poison Ivy:

But sometimes, celebrity costumes aren’t too well thought out and become seriously controversial—and fans don’t let the offender live it down for years.

With that said, what follows are five instances when celebrities wore famously controversial Halloween costumes, ranked by tastelessness.

Three-time Olympic gold medalist Shaun White dressed as Simple Jack from the movie Tropic Thunder, and was criticized by the Special Olympics for mocking people with disabilities.

White issued an apology in the form of a tweet, saying:

“I owe everyone in the Special Olympics community an apology for my poor choice of Halloween costume the other night. It was a last minute decision. It was the wrong one. The Special Olympics were right to call me out on it. They do great work supporting so many tremendous athletes and I am sorry for being insensitive. Lesson learned.”

4. Heidi Klum as the Goddess Kali

Supermodel and former Maxim cover girl Heidi Klum usually has amazing and intricate Halloween costumes, but in 2008, the model dressed up as Kali, the Hindu goddess of destruction.

And though the costume was undeniably really well-made, it offended Hindus, and Indo-American statesman Rajan Zed said the Goddess was “meant to be worshiped in temples and not to be used in clubs for publicity stunts.” According to Gawker, Hindu-American leaders demanded an apology.

Klum reportedly said,” I loved it because she’s so mean and killed all these different people and [had] fingers hanging off [her] and little shrunken heads everywhere.”

3. Julianne Hough as Crazy Eyes from Orange is the New Black

@KatieGeorge2 Non-PC would be bringing up that time that Julianne Hough wore blackface for Halloween. #GreaseLive pic.twitter.com/K9XV90Gx3t

Normally, it’s all fun and games to dress up as a movie or TV show character for Halloween, but it’s generally frowned upon when the costume involves blackface, as Julianne Hough’s 2013 costume as Crazy Eyes from the Netflix series Orange is the New Black did.

According to the Smithsonian National Museum of African American History and Culture, blackface is a take on Minstrelsy, or “comedic performances of ‘blackness’ by whites in exaggerated costumes and make-up,” where the main focus was to mock enslaved Africans, and would portray them as “lazy, ignorant, superstitious, hypersexual and prone to thievery and cowardice.”

2. Chris Brown as a Terrorist

Dressing up as a terrorist does not make for a very nice costume, considering the sheer amount of pain, death, and destruction they cause. But Chris Brown doesn’t care, and he dressed up as one for Halloween back in 2012.

However, unlike most celebrities who issue apologies when they’ve offended the public, Chris Brown issued a big old fuck you to anyone who didn’t appreciate his costume and told them to “get over it.”

It’s fucking Halloween! It’s a motherfucking pagan holiday! We dress our kids up as satans, demons, little goblins and all this other shit. Get over it, people! I was dressed as the people we killed… Bin Laden! And everybody who really mad about it: fuck y’all.

1. Prince Harry as a Nazi

I don’t even need to explain why dressing up as a Nazi is a bad idea. C’mon, Harry. Really?