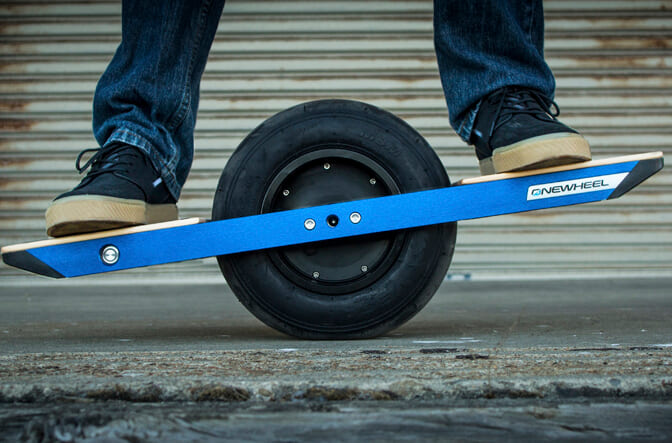 Following up on an emergency court order yesterday afternoon on the show floor of #CES2016 here in Las Vegas, a pair of federal marshals seized the products and sales materials of Changzhou First, a Chinese company accused of infringing on Future Motion’s patented Onewheel electric skateboard, pictured above.The offending product in question that bears a striking resemblance is CZ First’s “surfing electric scooter,” as pictured below:

Almost a year ago, Onewheel successfully raised over $630,000 on Kickstarter and has been shipping them to customers for several months. They attempted to contact the Chinese company before the show, but didn’t get a response. So things came to a head here right on a show floor, ironically on which attendees were strictly forbidden from riding any sort of non-medically necessitated electric vehicles.Having ridden the Onewheel pretty extensively outside the show, we can say that it’s a great ride. Something for active folks who are out for an adventure, as opposed to just lazy denizens trying to troll around the mall with minimal exercise. It really is a unique and fun experience, so Future Motion seems reasonable in their fear.In other words, they needn’t just worry that they’ll be underbid in the market by a knockoff, but that their technology will be cheaply incorporated without the same rigorous safety concerns. And—as has been shown in the news repeatedly as of late—that could damage not just their own reputation, but that of the entire industry.As their Chief Evangelist Jack Mudd told us, “We’re about making the world a more awesome place. We refuse to compromise when it comes to the riding experience and safety of Onewheel, which is why we make every board with love in San Jose, California using only the highest quality components.”