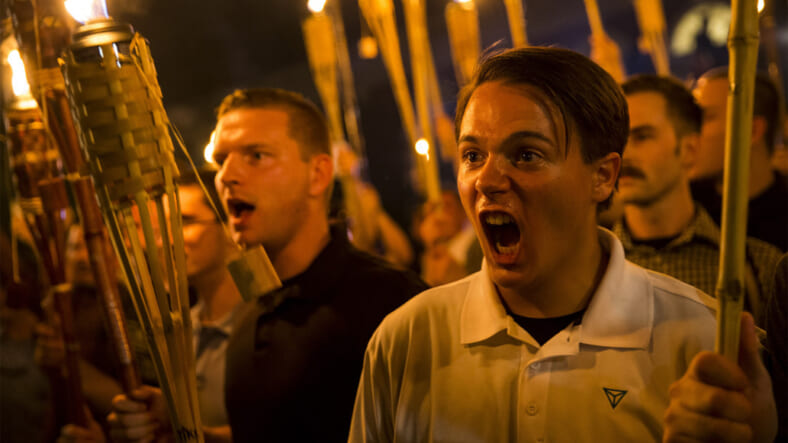 An anti-racist Twitter account is taking aim at white nationalists who marched in last weekend’s disastrous “Unite the Right” rally in Charlottesville, Virginia.

Called “Yes, You’re a Racist,” the feed has begun posting photos and sharing identities of those who marched at the infamous white nationalist demonstration on Saturday.

The clash near the campus of the University of Virginia culminated in the death of a 32-year-old woman and injured 20 others after an enraged white nationalist reportedly drove his Dodge Challenger into a crowd of counter-protestors.

James Alex Fields Jr., 20, of Maumee, Ohio, is now being held at a Virginia jail and is facing second-degree murder charges.

If you recognize any of the Nazis marching in #Charlottesville, send me their names/profiles and I'll make them famous #GoodNightAltRight pic.twitter.com/2tA9xliFVU

“If you recognize any of the Nazis marching in #Charlottesville, send me their names/profiles and I’ll make them famous,” the account, which boasts over 280,000 followers and counting, tweeted on Saturday.

The messages rolled in with a fury. In the days since, the account has unmasked a number of protestors… and even got one fired.

One marcher, 20-year-old University of Nevada student Peter Cvjetanovic, apologized to local news after he was outed… to a certain extent.

“I did not expect the photo to be shared as much as it was. I understand the photo has a very negative connotation,” Cvjetanovic told Channel 2 News in Reno, Nevada.

“But I hope that the people sharing the photo are willing to listen that I’m not the angry racist they see in that photo. As a white nationalist, I care for all people. We all deserve a future for our children and for our culture. White nationalists aren’t all hateful; we just want to preserve what we have.”

Another was fired by his employer, a Top Dog restaurant in Berkeley, California.

“The actions of those in Charlottesville are not supported by Top Dog,” the restaurant said in a statement. “We believe in individual freedom, and voluntary association for everyone.”

Another, identified as Twitter user @FearsWilliam, hasn’t been so remorseful. He re-tweeted the image of him giving the Nazi salute with a “Tx lol” caption.

He describes himself as the “Charismatic leader of a White breeding cult” on his Twitter bio.

CNN reports that the murder suspect’s mother thought he was was just attending a rally in support of President Trump:

Fields made his initial court appearance Monday morning via a video link from jail. He remains in custody. The judge appointed an attorney for Fields and set August 25 as the date for the next hearing.

Fields is being held on suspicion of second-degree murder, malicious wounding and failure to stop in an accident that resulted in death.

His mother, Samantha Bloom, told the Toledo Blade that she didn’t know her son was going to Virginia for a white nationalist rally. She thought it had something to do with President Donald Trump.

She told the Blade she didn’t discuss politics with her son. She was surprised her son attended an event with white supremacists.”He had an African-American friend,” she told the Blade.