Demonstrations sparked by the death of George Floyd in Minneapolis police custody turned violent in cities from coast to coast. 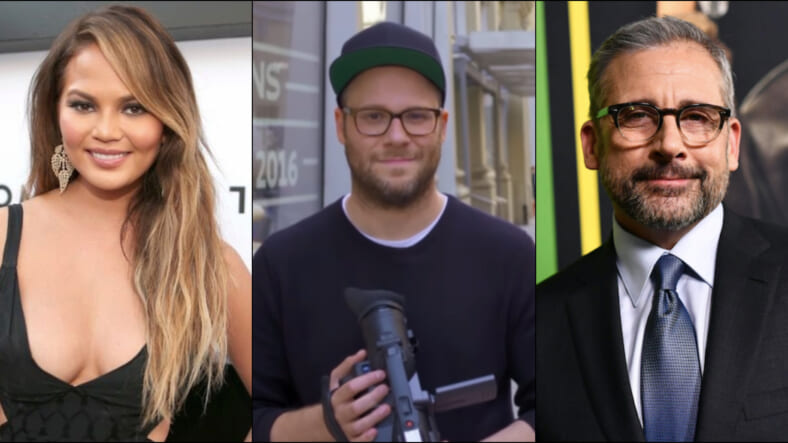 George Floyd died after former Minneapolis PD officer Derek Chauvin restrained him on the pavement, knee on his neck, during an arrest for suspected forgery. All the officers involved were fired and Chauvin has been charged with third degree murder, but the horrific video of Floyd’s apprehension spawned outraged protests from coast to coast—and with them several arrests.

In response to those arrests, celebrities are taking on supporting roles with the one thing we know they have: money. A diverse wave of stars including model Chrissy Teigen and actors Seth Rogen and Steve Carell took to Twitter to donate bail money for protesters. For Teigen, the donations were expressly political.

In celebration of whatever the fuck maga night is, I am committed to donating $100,000 to the bail outs of protestors across the country.

In response to a critical tweet about the protests from President Trump, Teigen wrote in part that she was “committed to donating $100,000 to the bail outs of protestors across the country.”

She wasn’t done. A now-deleted tweet from another Twitter user calling protesters “rioters and criminals” prompted Teigen to literally double down, upping the donation to $200,000.

Other celebs followed suit, like Seth Rogen, who matched a donation from the Safdie Brothers, directors of Adam Sandler’s sleeper hit Uncut Gems.

(And then much more)

All celebs were taking a gamble of sorts with their public images. Replies to Carell’s tweet alone demonstrated the political divisions between those supporting the protesters and those who believe the demonstrations are just excuses for rioting.

If any of these contributions were surprising, the involvement of one celebrity, in particular, wasn’t a shock at all: former 49ers quarterback Colin Kaepernick.

In fighting for liberation there‘s always retaliation. We must protect our Freedom Fighters. We started a legal defense initiative to give legal representation to Freedom Fighters in Minneapolis paid for by @yourrightscamp

For representation or to donate https://t.co/q0pzAObCiG

Kaepernick, who in 2016 began silently taking a knee during the national anthem before NFL games to protest police violence against young black men, launched a legal fund, tweeting that in “fighting for liberation there‘s always retaliation. We must protect our Freedom Fighters. We started a legal defense initiative to give legal representation to Freedom Fighters in Minneapolis paid for by @yourrightscamp.”

On Sunday, May 31st the Washington Post referred to the Saturday George Floyd protests in cities across the nation as a “night of fire and fury.” The paper listed some key developments, including the following:

* Federal buildings in the nation’s capital were vandalized, and clashes erupted for a second day between Secret Service agents and demonstrators outside the White House.* The mayor of Richmond said a curfew will be imposed starting Sunday night after protesters targeted the city’s symbols of history — a scene repeated in Charleston, S.C.; Raleigh, N.C.; and other Southern cities.* California Gov. Gavin Newsom (D) declared a state of emergency and deployed the National Guard to Los Angeles as violent demonstrations raged. Mayor Eric Garcetti initially resisted asking for Guard troops because he did not want to evoke memories of the 1992 Rodney King riots, but conditions continued to deteriorate in the city.* Rep. Alexandria Ocasio-Cortez slammed New York Mayor Bill de Blasio (D) for saying he would not “blame” New York City policy officers who appeared to have driven their vehicle into a throng of protesters.* Target said it was temporarily closing 175 of its stores across 13 states, including in Minnesota, where the retail giant is headquartered.

The hacker collective Anonymous also appeared to come to life on Saturday night, and shortly after their Twitter account posted the following the Minneapolis police department website was knocked offline.

Anonymous message for the American Spring.

Many hard-hit cities like Los Angeles, Nashville, and New York began cleaning up on Sunday even as new protests arose elsewhere, including the European Union.