Two Comedians Tricked a Morning Show Into Booking Them As ‘Fitness Experts’, Now They’re Getting Sued 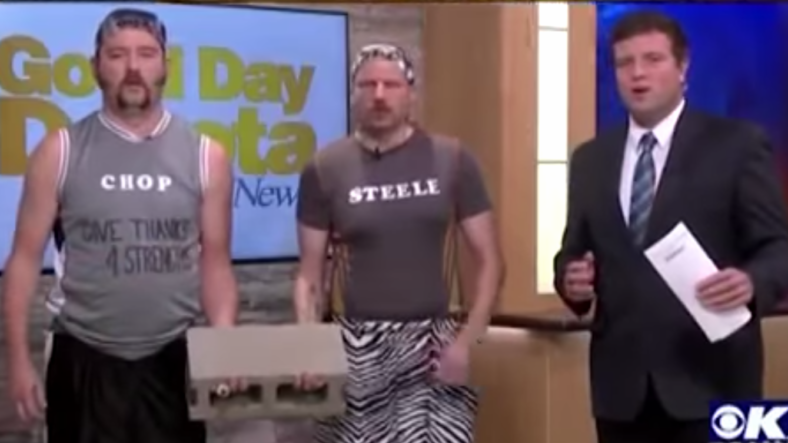 A New York-based comedy duo is getting sued by a Wisconsin TV station after they pretended to be fitness experts on a morning news show.

Things quickly got uncomfortable, as the exercises were utterly ridiculous.

…had a sword fight with racquetball and badminton rackets…

…and stomped on Easter baskets.

Perhaps the most ridiculous part was this stretch, which Steele explained works, “your delts, your tris, your plaps—all the major chest muscle groups.”

Anyway, the station’s parent company, Gray television, is reportedly suing them for presenting fake names and bogus bios to get booked on the show, according to Mercury News.

While they don’t deny that, Preueher told the New York Post that “Gray Television didn’t have a sense of humor about this thing,” and that the station is suing to scare them.

Prueher and Pickett managed to get “Chop and Steele” booked on seven different morning shows as a clever way of promoting the Found Footage Festival, a touring show in which they provide comedic commentary on strange VHS recordings.

Preuher also told clevescene.com that the prank was meant to make “the point about how easy it is to put forth fake news.”

Regardless, the TV station isn’t having it. The Huffington Post has further details.

Attorneys for Gray Television aren’t commenting on the suit, but the complaint alleges the duo infringed on the copyright of the Nov. 29 episode of “Hello Wisconsin,” and is likely to do so again unless the court issues a permanent injunction, according to the Mercury News.

The suit also asks for a judgment against the Found Footage Festival “for any profits or gains attributable to the infringement, along with compensatory and punitive damages, costs and attorneys’ fees incurred in pursuing the action and interest.”

While a simple Google search on WEAU’s part would have saved everyone from this legal headache, one thing is for sure: Hans and Franz must be proud.