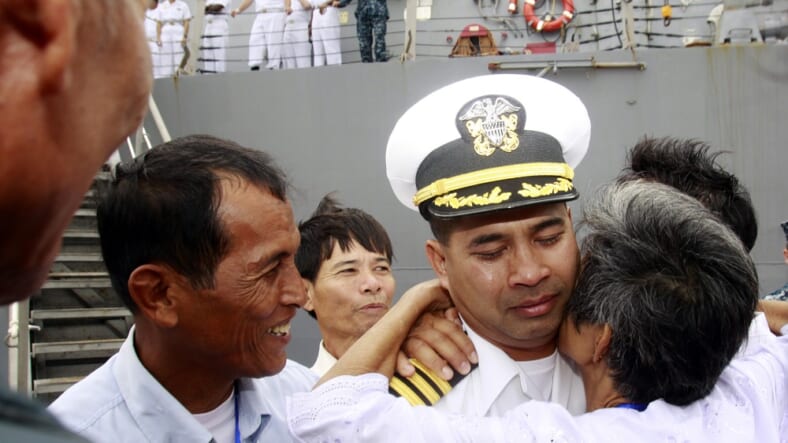 Navy Commander Michael Misiewicz has stopped contesting charges he traded American military secrets for bribes that, frankly, don’t sound like they were worth the trouble. According to a report on Misiewicz’s plea in the Washington Post, the Cambodian-American Navy officer traded information for cash, prostitute service, and tickets to see Lady Gaga.

Misiewicz, who was first arrested in 2013, was just one of a stunning number of Navy officers accused of similar behavior, reported the Post. He makes the eighth of those accused to plead guilty. The Post article indicated he was a major player in a scheme that has roiled the Navy’s upper echelons for years:

Prosecutors and federal investigators accused Misiewicz of playing a key role in a long-running bribery scheme that enabled a Singapore-based defense contractor, Glenn Defense Marine Asia, to fleece the Navy of more than $20 million. The company held contracts for more than 25 years to resupply Navy vessels during port visits in Asia and has admitted to massively overcharging the government for its services.

Misiewicz’s job was of special significance to Glenn Defense Marine Asia, according to the Post. From 2011 to 2012, he was the 7th Fleet’s deputy director of operations. That meant he could influence where ships docked and the durations of their stays.

Gifts the commander received weren’t just limited to canoodling with prostitutes or jaunts off to hang with Gaga’s Little Monsters. At one point, Glenn Defense Marine Asia even paid him off with tix for Misiewicz and four of his family members to attend a performance of Lion King.

The Post reported that the Navy is still looking into the actions of over 100 people who are “under investigation for possible criminal, ethical or administrative violations.”

We’re sure there are more stories of retroactively embarrassing perks to come.