Author Cormac McCarthy Is Alive and Well, No Matter What the Internet Says

The ‘No Country For Old Men’ genius was the subject of a death hoax retweeted by USA Today and Joyce Carol Oates. 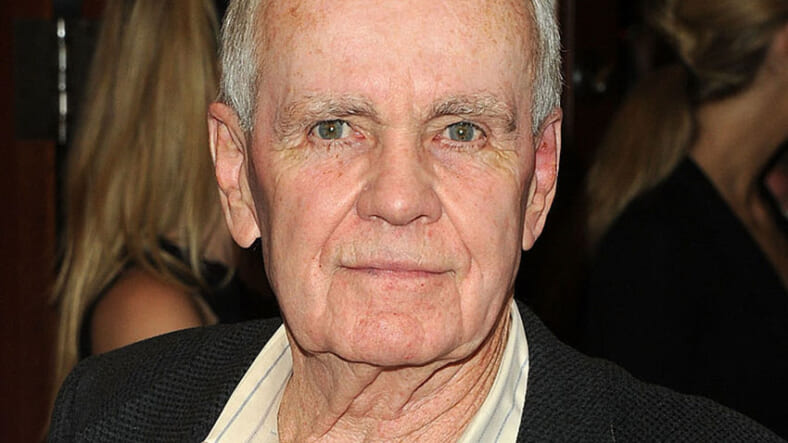 Cormac McCarthy, the iconic author who created indelible characters like relentless psychopath Anton Chigurh in great novels like No Country For Old Men, is not dead. That’s not normally a statement worth making, but on Tuesday morning McCarthy’s fellow literary luminary Joyce Carol Oates fell for a McCarthy death tweet from a hoax account:

Oates, who many believe could win a Nobel Prize in literature one day, didn’t pay attention to the odd language in the tweet she quoted—”Cormac McCarthy dies for stroke…”—or notice the account had only tweeted four times. It also lacked Twitter’s blue verified checkmark, which is often a good measure of how reliable the account may be.

Unless that account was the usually very reliable USA Today Twitter feed, which fell for the hoax as well and tweeted a McCarthy death notice of its own.

As deaths by social media go, however, this one was debunked a little faster than some. USA Today deleted its “Cormac McCarthy is dead” tweet and followed up with this important breaking news:

Cormac McCarthy is alive and well.

McCarthy certainly isn’t the first famous person whose non-death was lamented enough on social media to trend long after reports were debunked. As the Daily News reported in January, there’s an almost endless list of celebs rumored dead and gone online. They include Jackie Chan, Paul McCartney (actually the subject of decades of death rumors), and Eminem, to just name a few.

The rumor about McCarthy dying from a stroke may have been unique because it was readily believed by a possibly even more well-known peer in the literary community, lending the lie immediate weight.

Celebrity death hoaxes are incredibly easy to create, too—there are websites with vaguely newsy-sounding monikers that have pre-made templates for news stories in which you can plug in a famous name then publish what seems to be a legit news story to fool all your friends into posting on Facebook and Twitter.

The McCarthy death hoax, however, may well have been the work of Italian trickster Tommasso Debenedetti. Debenedetti has been tricking people this way for years, as noted in a Business Insider profile of him from 2014:

Debenedetti started his campaign of hoaxes in 2000 while working in the Italian newspaper industry. More than 60 newspaper interviews conducted by Debenedetti are believed to have been published. The New Yorker says that Debenedetti’s supposed interview subjects included John Grisham, Desmond Tutu, Cardinal Ratzinger, Mikhail Gorbachev and even the Dalai Lama.A 2010 New Yorker story revealed that all of his lengthy interviews with famous figures were completely fake. For 10 years, Debenedetti had fooled editors at conservative Italian newspapers into printing fictitious interviews that often included outlandish quotes.

Chances are great that the pick-up on McCarthy’s death hoax will only encourage whoever started the rumor to try it again, whether it was Debenedetti or not (though we’re pretty sure it was him).

In case all the tweeted denials weren’t enough, Maxim reached out to Alfred A. Knopf just to make sure Cormac McCarthy really was still kicking after all. The email response from Knopf publicisit Anna Dobben was as succinct as a conversation written by McCarthy: “Cormac McCarthy is alive and well.”

So there you go.