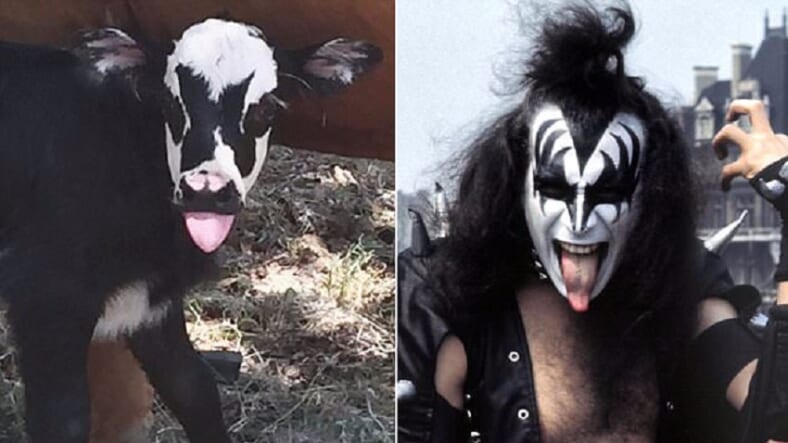 KISS were towering rock gods of the ’70s, and part of their appeal was their somewhat cartoonish malevolence embodied by their distinctive black and white makeup. Most awesomely malevolent of all was bassist/singer Gene Simmons. And his evil has apparently been so pervasive that it ended up cursing Texas cattle and spawning his bovine likeness.

At least that’s what some of the moral scolds of the ’70s and ’80s might think, looking at the recently-born calf in the photo above. Let’s face it, seeing the calf and Simmons in full makeup side-by-side makes you pause, right?

It certainly startled rancher Heather L. Taccetta, of Kerrville, Texas. She took a photo of the calf right after its birth on July 28 and sent it to the local tourism board—and they promptly posted the photo on Facebook.

“Gene Simmons, Where were you on our about November 25, 2016?” asked the Hill Country Visitor page post.

It went on to describe the circumstances of the birth of the most hard-rocking cow ever and then indicated they may not have the heart to eat Gene Simmons cow.

“Now Obviously, we can’t serve this fine specimen, we may just keep Genie as we call her, as a Mascot for the Steakhouse.”

If the official Kiss Facebook page is any indication, the band thinks the resemblance is pretty epic.

Hopefully, the ranchers who own the unique calf will stick to their word and keep it as a mascot.

If you ever eat at the Cowboy Steak House in Kerrville—where this moo-racle occurred— and then are seized with uncontrollable urges to rock and roll all night and party every day, we’ll know Genie’s ultimate fate.