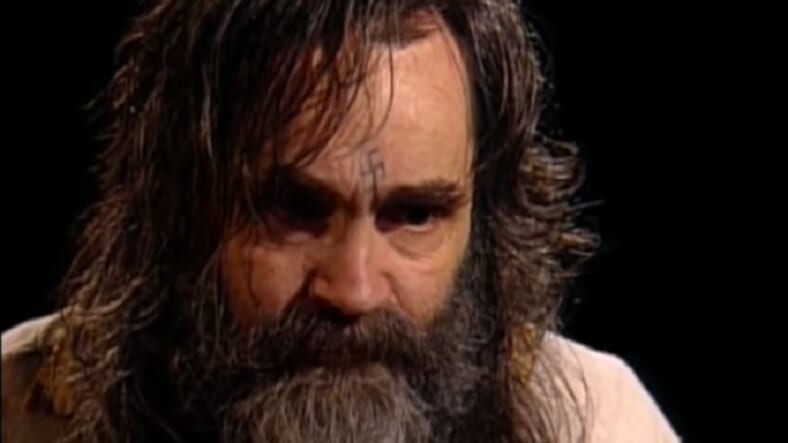 In 1969 a failed musician and ex-con named Charles Manson manipulated damaged and sometimes just plain sociopathic young people into committing multiple murders—including the murder of actress Sharon Tate—at his direction. He and the killers he commanded went to prison in 1971.

Manson died of an unspecified illness Sunday night in Bakersfield, California. He was 83.

The crimes of the Manson Family left an indelible mark on southern California and on America as well. The Associated Press puts a fine point on this in its report on the killer’s death:

A petty criminal who had been in and out of jail since childhood, the charismatic, guru-like Manson surrounded himself in the 1960s with runaways and other lost souls and then sent his disciples to butcher some of L.A.’s rich and famous in what prosecutors said was a bid to trigger a race war — an idea he got from a twisted reading of the Beatles song “Helter Skelter.”
The slayings horrified the world and, together with the deadly violence that erupted later in 1969 during a Rolling Stones concert at California’s Altamont Speedway, exposed the dangerous, drugged-out underside of the counterculture movement and seemed to mark the death of the era of peace and love.

After he was behind bars Manson‘s bizarre celebrity only seemed to grow. It was aided by his typically insane television interviews (see video above). He would use journalists’ questions as an opportunity to rant like what he was—a psychopathic cult leader.

Manson always seemed to truly believe he wasn’t at fault for anything. A statement he made during his trial, as quoted by the AP, perfectly encapsulated his philosophy: “These children that come at you with knives,” he said, “they are your children. You taught them; I didn’t teach them. I just tried to help them stand up.”

Manson is survived only by his bloodthirsty legacy of murder and hate.

No one requests you do anything but be glad he’s gone.