You need to see this INSANE viral video. 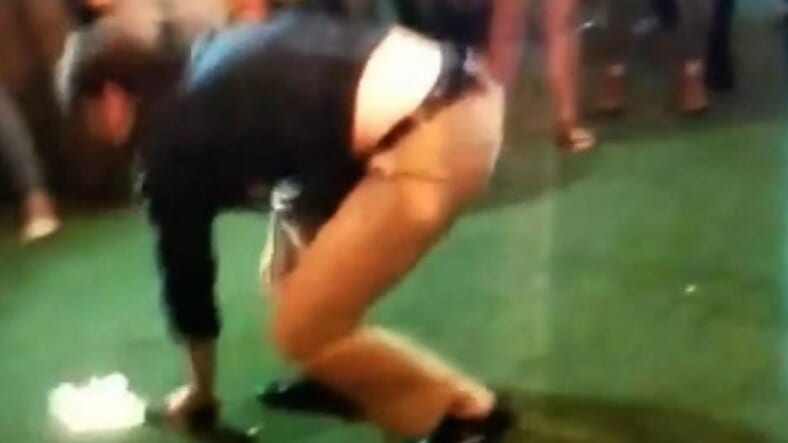 This @FBI agent was dancing at a Denver bar on Saturday night. Did a back flip, gun falls. He picks it up and a round is fired, hitting a man (he’ll be ok.) @DenverPolice investigating. #9News pic.twitter.com/MwV1WpNzAQ

An FBI agent busted a move—and then busted a cap in someone’s leg.

Viral video of an off-duty agent dancing at a Denver bar takes a turn for the worse when he accidentally shoots a patron.

A crowd had formed around the agent to watch some admittedly good moves. But when he tried to backflip, a concealed pistol fell from his holster. The agent frantically lunged for the loose weapon and accidentally fired.

The bullet hit a man in the lower leg. Denver police say he is expected to survive, per CNN.

The agent, who was not arrested and therefore remains unidentified, was turned over to his FBI supervisor.

A legal expert believes that the agent is receiving special treatment.

“There is no question in my mind if anyone else other than law enforcement engaged in that behavior with this result, they would be charged with prohibitive use of weapons, illegal discharge of weapon,” attorney Christopher Decker told KDVR Denver.

“A law enforcement officer should not be able to commit crimes simply because they are law enforcement. It will be interesting in the end to see if the district attorney can wrap their mind around anything, but reckless conduct occurred in that situation.”

Surveillance footage and blood test results will be used to determine whether the agent was under the influence of alcohol. We’re going to go with “definitely” based on this unedited version of same video in which the dude appears to smile and walk away like nothing happened.

Video of a FBI agent dancing in a club in Denver on Friday night, dropping his gun and accidentally discharging it. He shot one person in the leg. https://t.co/9r0rE04kHs

The freak accident has created a stir on social media:

He acted like the gun didn't even go off!!

This guy needs his gun, and perhaps his job, taken away from him.

FBI agents get 110 hours of instruction and fire their pistols approximately 4000 times during training.

Now watch this video of an FBI agent accidentally shooting someone while dancing, and then try to tell me ppl who want to arm teachers aren't morons. pic.twitter.com/BNkQLNUMPg

This was negligence, not an accident.

He lifts his hands like "not me" knowing that had to hit somebody in that crowd.

In a statement, an FBI spokesperson said “the investigation is active, ongoing, and a personnel matter so we cannot provide comment at this time.”