In parts of the South, it might as well be April. 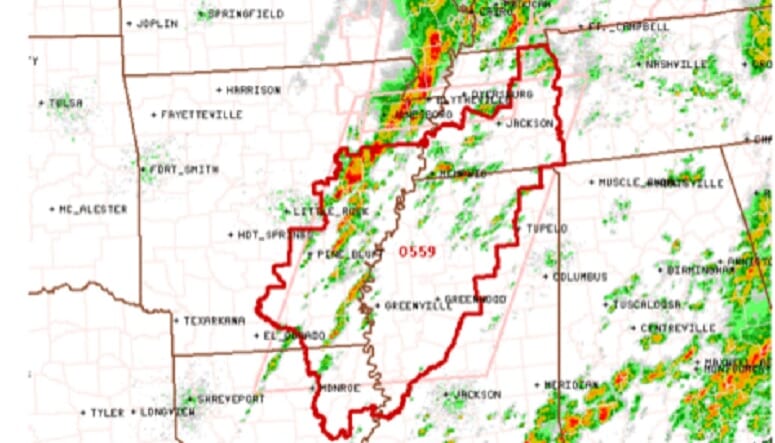 One of the weird effects the record El Nino in the Pacific is having on U.S. weather is on display in the Midwest and the South today. Forecasters at the National Weather Service’s Storm Prediction Center have issued a highly unusual warning for the middle of the nation. The area, which encompasses parts of Louisiana, Mississippi, Arkansas, and Tennessee, is in a Particularly Dangerous Situation, or PDS.

The PDS warning is rare enough; the meteorologists at the SPC aren’t big fans of dramatic announcements. That a PDS has been issued in December for the possibility of multiple tornadoes, some “intense” and long-lived, borders on bizarre.

The Associated Press report on the storm system looming across the heart of the country illustrates the strangeness of the situation:

These conditions can produce “long-tracked” tornadoes—high-powered, deadly twisters that stay on the ground for hundreds of miles.

Even thunderstorms producing gusty winds may cause problems unique to the season. The AP reports that Tennessee officials were “worried that powerful winds could turn holiday yard decorations into projectiles” as storms blasted through. This leads to the bizarre prospect of plastic reindeer horns impaling inflatable snowmen or other items becoming festive skull-cracking projectiles.

The storm system producing these conditions has already killed an Arkansas woman and flipped trailers and damaged homes in Louisiana.

It’s safe to say that these conditions as well as the unusually mild temperatures that reach well into New England, weather-wise it’s not feeling a bit like Christmas at all.