The Deadliest Animals in America, Ranked

The most lethal creature is NOT what you’d expect. 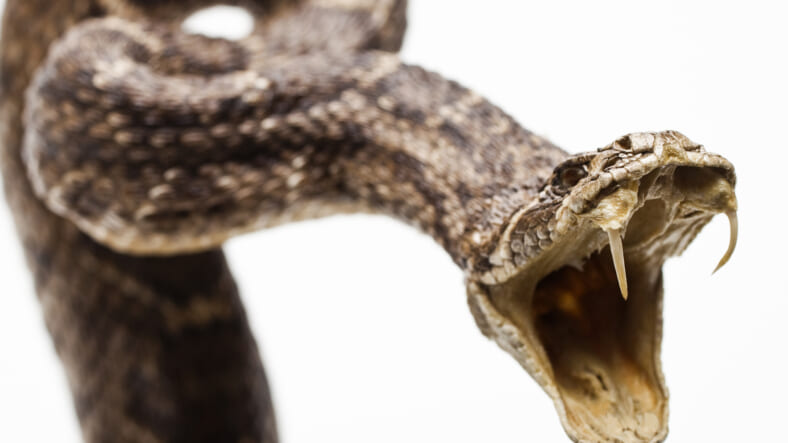 Of all the animals in America, most are cute, fluffy, and simply amazing… whereas others are absolutely terrifying and will totally attack you for no reason.

Tiny little bunny rabbits? Adorable, and will never, ever hurt you. But a rattlesnake? Super venomous, and will totally stare at you with its beady little snake eyes, and then proceed to attack you with the full intention of taking you down.

In a new study from Stanford University, researchers analyzed data from 2008 to 2015 of mortality rates associated with venomous and nonvenomous animals in the U.S., and the results were definitely not what you’d expect.

But before we get to the list of deadliest animals, here are some stats on animal-related deaths in America: An average of only 1,610 people die from animals every year, which comes out to 4.8 people per 10 million. When you think about it, that’s a minuscule fraction of the total 2.7 million deaths per year, meaning your odds of meeting your maker at the hands of an animal are pretty slim.

Even so, you’d think those few deaths happened because someone accidentally sat on a Black Widow spider and got bit on the asscheek, or was unlucky enough to fall into a Louisiana swamp and become alligator chow, right? Right. But no. That’s not at all how most animal-related deaths happen, which is all the more reason to be slightly worried.

Without further ado, the six deadliest (types of) animals in the United States, ordered from least lethal to most.

Contrary to popular belief, this totally unrelated bunch of animals are only responsible for a fraction of a percent of deaths, so they hardly count as super deadly. But still, be careful.

Next, making up three percent of casualties are venomous spiders, which includes Recluse spiders, Widows, and other unsettling and highly poisonous creepy-crawlies.

Another three percent of fatalities are from poisonous snakes and lizards, so if I were you, I wouldn’t go poking around under rocks and shit in case a serpent pops out and sinks its fangs into your arm.

This one personally makes me very sad. These beautiful creatures are responsible for 17 percent of U.S. animal-related deaths.

I should mention, though, that most (if not all) of dog-related deaths are from pit bull attacks. Just so you know.

This one is not too surprising, is it? Hornets, wasps, and bees are responsible for 30 percent of animal-related deaths, and I’m going to go ahead and assume the majority of this percentage are people who are deathly allergic to stinging insects and die of anaphylaxis, and a small number of idiots dumb enough to fuck around with their nests, get stung a bunch of times, and die of toxicity.

That’s right. The number one deadliest animal in the continental United States is the average farm animal — namely cows and horses.

According to the researchers, the number one deadliest category of animal is “other mammals,” which encompasses mainly farm animals like cattle and horses, and the occasional raccoon and such. These account for 36 percent of deaths, which means Old MacDonald’s crew is not screwing around. They will mess you up.

“From this search, we found that the rates of death from encounters with animals has remained relatively stable from the last time we performed this analysis,” says lead researcher Dr. Jared Forrester.

“Animal-related deaths in ‘controllable’ situations, such as on the farm or in the home, still account for the majority of the deaths. Increased specificity in the coding of deaths due to animals in farm environments would help public health professionals target interventions.”