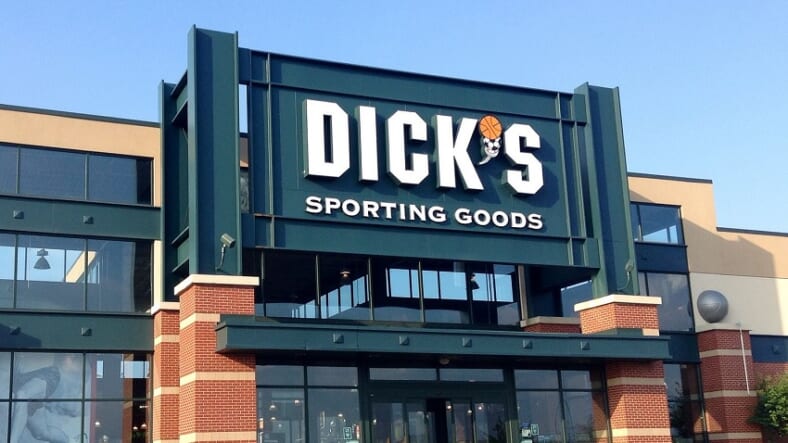 The deadly Valentine’s Day school shooting at Marjory Stoneman Douglas High School in Florida has inspired a movement among teens to protest for changes in gun laws. Retail outlets that sell assault weapons are taking notice. Dick’s Sporting Goods indicated Wednesday that it is making a huge move inspired by the mass murder, which killed 17.

Assault-style weapons will soon be gone from Dick’s display cases. The company announced the move on Twitter and ABC’s Good Morning America.

We at DICK'S Sporting Goods are deeply disturbed and saddened by the tragic events in Parkland. Our thoughts and prayers are with all of the victims and their loved ones. https://t.co/J4OcB6XJnu pic.twitter.com/WmT50BO7mx

But thoughts and prayers are not enough. We have to help solve the problem that's in front of us. Gun violence is an epidemic that's taking the lives of too many people, including the brightest hope for the future of America – our kids. https://t.co/J4OcB6XJnu pic.twitter.com/6VoKwJe8tH

In the exclusive interview on GMA, Dick’s CEO Edward Stack told George Stephanopoulos that due to “what’s happened and looking at those kids and those parents, it moved us all unimaginably.”

Stack said that considering “the loss and the grief that those kids and those parents had” prompted the company to say, “We need to do something.”

Chairman and CEO of Dick's Sporting Goods tells @GStephanopoulos why the company has decided to no longer sell assault style rifles or firearms to anyone under 21 years of age, and no longer sell high capacity magazines. pic.twitter.com/xiuMfqIZLd

The gun Nikolas Cruz used in the assault wasn’t purchased at Dick’s, but he bought a gun there in 2017. Stack said in that instance his company “did everything that the law required and still he was able to buy a gun.”

“When we looked at that,” continued Stack, “we said, ‘The systems that are in place across the board just aren’t effective enough to keep us from selling someone a gun like that.’”

The store will remove the weapons immediately. Asked if the company would ever change its mind, Stack was succinct: “Never.”

THANK YOU DICK’S
Dick's Sporting Goods CEO on decision to no longer sell assault-style rifles: 'We don’t want to be a part of this story' – ABC News – via @ABC https://t.co/omxVoerRck

Liberals: Dick's Sporting Goods has the right to refuse service to whomever they wish.

Also Liberals: Christian bakers have no right to refuse service for gay weddings.

"Dick's Sporting Goods" has jumped the shark. Pretending there's something called and "assault-style" weapon is simply giving in to the anti-2nd Amendment left. I'm very disappointed.

That Dick’s doesn’t foresee reversing the ban indicates it’s for real, not necessarily a cynical and temporary change meant to keep a broad customer base.

It remains to be seen what effect it will have at all. There are still plenty of gun retailers out there ready to take up the slack.