“My shorts are broken!” 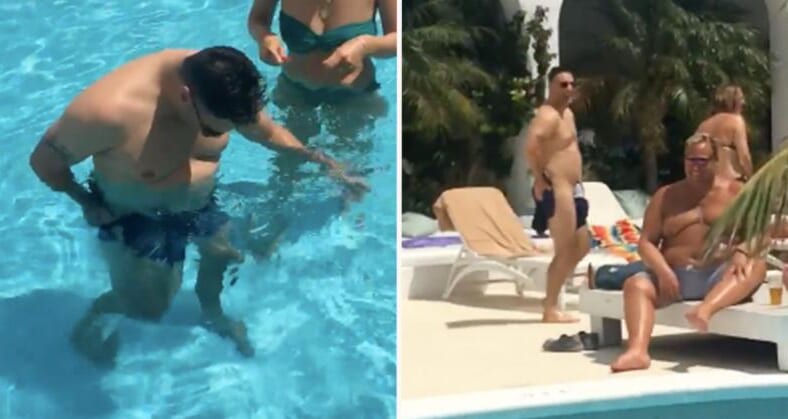 A British man was left nearly naked in the middle of his hotel pool after being “gifted” a dissolving swimsuit during his vacation in Ibiza.

The unsuspecting victim of the viral prank, Lee Kenny, was enjoying a sun-soaked swim at a swanky resort with his wife and so-called “friends” when he came to a harrowing realization.

“My shorts are broken!” he exclaims repeatedly in the video above. “What do I do?!”

After analyzing his predicament, Kenny finally retreats to the privacy of his hotel room… but not before he scurries across a busy pool deck while desperately trying to cover himself with what little remained of his trick swim trunks.

Rachel Whittaker, one of the prank’s masterminds, explained how she and Kenny’s friends brought their plan to fruition.

“My husband had heard about some ‘dissolvable swim shorts’ and thought it would be funny to set up our friend for when we go on holiday,” Whittaker told Unilad.

“[My husband] told Lee he would buy them for him as a present for our forthcoming holiday to Ibiza, and all the lads pretended to be jealous of Lee for receiving a present and for having his own personalized swim shorts,” she said.

Sure enough, Kenny sported his “personalized swim shorts” the very first day of vacation, just like they planned.

“Lee couldn’t get out of the pool without walking out through a group of people,” Whittaker added. “He had no towel to grab and ran back to his room. Luckily the waitress helped cover his modesty with a drinks tray.”

The group got in one final laugh at Kenny’s expense by feeding him a final white lie.

“When Lee returned – with his own swim shorts – his wife told him he was still not safe as it was a spray we’d used to make the swim shorts dissolve, which they’d used on all of his swimwear,” Whittaker said.

There is no such spray, but the dissolving swim trunks are very real. You, too, can “gift” your friend a pair for about $40 from the U.K.-based online store Little Wedding Treasures.

Just make sure the unlucky recipient has a sense of humor.