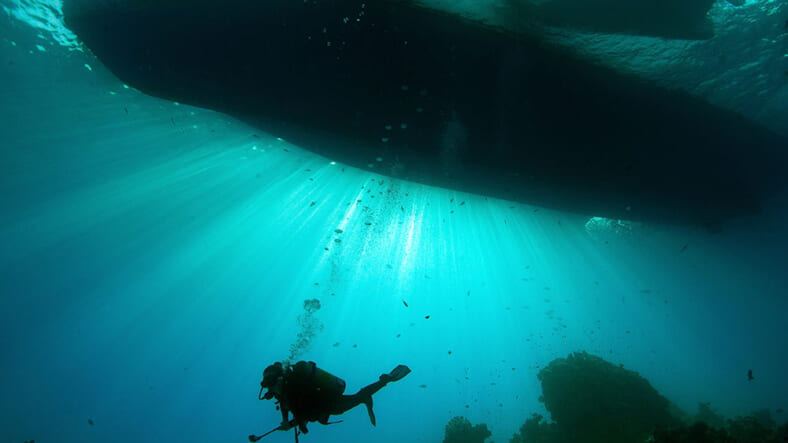 Christopher Le Cun says he was simply a curious explorer unaware of the danger when he had a terrifying encounter with a nuclear power plant’s intake tunnel. According to a report in the New York Daily News, Le Cun’s wild ride occurred in July, 2015, when he was scuba diving off Hutchinson Island in St. Lucie County, Florida:

After diving down, he felt a current that quickly pulled him toward one of three intake pipes, got sucked in and was immersed in darkness for five minutes in the water being taken to cool the St. Lucie Nuclear Power Plant.

According to an interview Le Cun gave to WPTV, the experience “kind of felt like I got sucked over a waterfall and just instantly complete darkness.”

“I was getting tumbled around and around,” he told the TV station, “I’m trying to hold onto my mask and my regulator. I finally get ahold of my light and I’m trying to look around. As far as you can see, it’s just black.”

The journey last as long as five minutes and Le Cun said in that amount of time, as you might expect, “You get to do a lot of thinking.”

At some point, fortunately, Le Cun was safely spit out of the intake. “I’m like, ‘is this heaven?'” He told WPTV.

Le Cun is suing Florida Power & Light, claiming there is no proper warning to boaters and swimmers who might venture as close as he did to the St. Lucie Nuclear plant’s underwater structures. Florida Power & Light says there are buoys clearly indicating the need to stay back.

Whatever way his suit goes, Christopher Le Cun pretty much wins all bar bets for best diving story from here on out, hands-down.