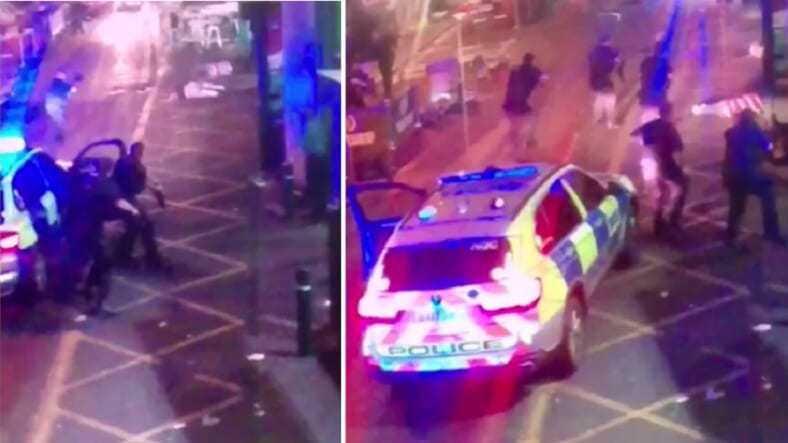 London is probably one of the most intensely monitored major cities in the world. So naturally there is closed circuit TV video footage of the moment three attackers rampaging in the vicinity of London Bridge were blown away by London Metropolitan police.

Eight were killed in the Saturday attack, the second of its kind in the UK in just a matter of weeks—a May 22 suicide bombing at Manchester Arena after an Ariana Grande concert killed 23.

Everything happened fast: Three men in a van plowed into pedestrians on a sidewalk then exited the vehicle and began slashing people at random, injuring dozens in addition to taking lives.

Police response was rapid, though—armed officers arrived just eight minutes after receiving the first reports something was going on, and the video demonstrates how quickly they took the bad guys out of commission.

There’s no doubt the cops were the heroes here, but LadBible highlighted an everyday hero in Roy Larner, who took on knife-wielding terrorists bare-handed, shouting “Fuck you, I’m Millwall”—a reference to his favorite soccer team.

It might be a good idea to recruit more guys like Roy Larner to man the front lines if there’s a danger of another attack anytime soon.