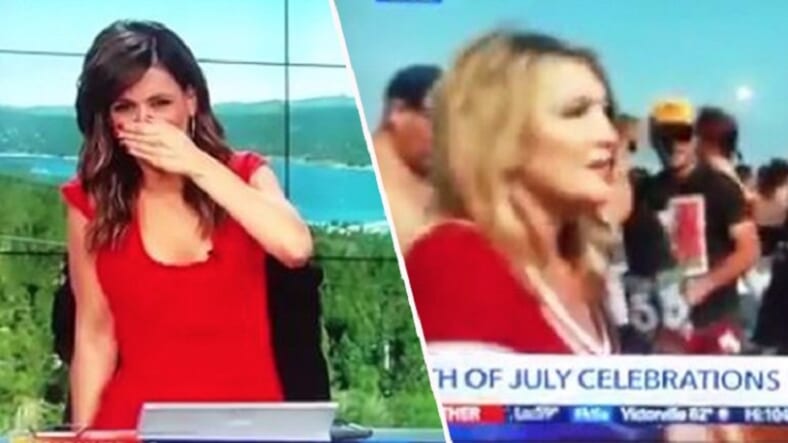 Reporters doing live shots for local TV have it rough. No, they do. They’re out there looking good in dress clothes and they still must navigate an attention-seeking public where everyone wants their viral moment. Also, in this instance, navigating beer puke.

KTLA journalist Wendy Burch was covering a special Iron Man competition on July 4th at a beach near Los Angeles. The report to some degree is self-explanatory—competitors gathered to swim, run, and then absolutely go to town swilling beer, all first thing in the morning.

The combination of physical exertion, heat, and beer made later events inevitable. The camera man even panned early in the spot to what amounted to a forewarning of grossness to come, briefly focusing on a woman in a bikini bent away from the camera, clearly horking up her breakfast Budweiser.

Then, right around the time Burch admitted things were “getting ugly,” they damn sure did, as an off-camera barf-explosion splattered Burch’s shirtless interviewee (who seemed completely unfazed) and the reporter herself (who was seriously totally fazed).

To KTLA’s credit, they apparently tortured their anchors with that shot at least twice in the span of an hour.

Writing in the Huffington Post about the experience, Burch said revealed why the guy didn’t seem nearly as alarmed as she was:

I grabbed a guy who appeared to be a spirited competitor, and from the evidence of his beer belly, had been clearly training for this event for years. My hope was that his broad… ah, erh… shoulders, could shield our morning viewers from the ups—and from what wasn’t staying down—in this competition. What I didn’t notice until later, is that he had a bullseye drawn on his back with the words “puke here” written in magic marker.And wouldn’t you know it? Someone took him up on the offer right during the middle of my live report, much to the chagrin, of me, our anchors and anyone in Southern California who may have been eating breakfast at that very moment.

Say what you will, that was one way to celebrate Fourth of July with a bang.